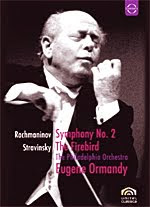 Some years ago, a friend asked me if I was one of those guys who sat in front of his speakers and simply listened to music. I said yes. He said, "That's sort of like meditation, isn't it?" I hadn't thought about it that way, but it did remind me that most folks don't actually listen exclusively to music. Instead, they're reading a book or a magazine; eating their lunch or dinner; doing their homework; working around the house, etc., when they're playing music. One of the important things that surround-sound in home theater systems has done for music listening is that it has often forced people to sit in the optimum listening position in front of the television and actually listen. At least, sometimes.

Which brings us to the point of the review: This EuroArts disc is a audio-video DVD for people who enjoy watching something while they're listening. On the disc, Eugene Ormandy conducts the Philadelphia Orchestra in live 1977 and 1979 performances of Igor Stravinsky's Firebird Suite and Sergei Rachmaninov's Symphony No. 2. They are not the greatest performances in the world, nor is it the best sound in the world, but it is a nice change of pace seeing a world-famous conductor leading a world-class orchestra.

Things begin with the Firebird music, which, of course, is colorful and characterful, with Ormandy doing his best to maintain the mystery and excitement of the piece. Then we get about nine minutes of Ormandy introducing the Rachmaninov, in which the conductor reminisces about his long friendship with the composer, complete with amusing anecdotes.

Lastly, we get to the Second Symphony, one of the most overtly Romantic pieces of music ever written. Rachmaninov premiered the work in 1908, making it one of the last vestiges of traditional Romanticism.  (Regardless, any number of twentieth-century composers as diverse as Aaron Copland and Alan Hovhaness carried on the Romantic tradition.)

Anyway, while there is much talk in the booklet notes about how neither Ormandy nor Rachmaninov liked the cuts often taken in the score by so many other conductors, it appears that Ormandy took a few here himself. That and the fact that Ormandy rather races through some of the movements makes his interpretation somewhat shorter than most complete versions.

Insofar as the sound is concerned, the DVD provides three formats: PCM stereo, Dolby Digital 5.1, and DTS 5.1. Of the three, the PCM comes across as the most natural, Dolby Digital seems to provide the most orchestral depth, and DTS appears to be the most dynamic (although also the brightest). I reviewed the disc on two separate systems:  First, in my home-theater setup using 7.1 speakers and a widescreen Sony XBR television (the disc's video derives from a typical, standard-def, 1.33:1 ratio broadcast of the Seventies) and afterwards in my living-room music setup in ordinary two-channel stereo, sans TV. In both instances and in all three audio formats, I thought the sound lacked much bite, detailing, transparency, treble extremes, deepest bass, and transient impact. Worse, I found the audience noise so intrusive, I was aware of it at all times. This constant background noise is mitigated somewhat when one's mind is centered on the video, but it's still present.

Nonetheless, as I've said, you don't buy these kinds of classical music videos for their audiophile sound qualities but to see and hear a live event. In this regard, the disc works fine.