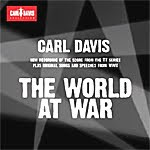 Composer Carl Davis (1936-) has given us any number of fine movie and television scores (The French Lieutenant's Woman, Napoleon, Pride and Prejudice), but his work on the monumental 1973 TV series The World at War is undoubtedly among his finest and most well-known work.  The present album, which Davis conducted with the City of Prague Philharmonic in 2003, combines some of his original music for the series with vintage songs and speeches from World War II. The result is a sometimes touching, sometimes stirring, always impassioned musical experience.

The program has a decidedly British bent, but that's understandable considering that although Davis was born in the U.S., he has spent most of his adult life in England. Additionally, the album presents only the conflict in Europe, with no mention of the War in the Pacific. So be it; there is only time to cover so much on a single compact disc.

Things begin with a brief except from a speech by Prime Minister Neville Chamberlain introducing us to the War, followed by Davis's main theme for the show and a German march. Then we get three popular songs of the day: "Wish Me Luck as You Wave Me Goodbye" (Gracie Fields), "We're Going to Hang Out the Washing on the Siegfried Line" (Arthur Askey), and "Boum" (Charles Trenet), followed by an extended suite of original music, "France Falls," which shows us Davis at his most moving and melancholy best.

You get the idea. Among the other pop songs of the day are Lale Anderson doing the sentimental "Lili Marlene," Irving Berlin in "This Is the Army, Mr. Jones," Anne Shelton singing "Coming in on a Wing and a Prayer," Flanagan and Allen performing "Run Rabbit Run," Carrol Gibbons with "I'm Going to Get Lit Up (When the Lights Go on Up in London"), Noel Coward and "London Pride," and Vera Lynn's heartrending version of "When They Sound the Last 'All Clear.'" In addition, we find the Red Army Choir doing "The Red Army Is the Strongest."

Among Davis's additional original music include "Red Star," "G.I. Blues," "Arnhem Airlift," "Warsaw Aftermath," "Turkey Shoot," "Blood, Sweat and Tears," "Reckoning," and the end titles for "The World at War." His music is clearly influenced by composers like Bartok, Britten, Shostakovich, and even Chopin, which is as it should be since the music's evocative tones change as the War changes. Unlike the popular tunes of the day that reflect positive, optimistic, upbeat moods, Davis's music mirrors the realities of war, the untold horror, death, and destruction. The contrasts make the album that much more affecting.

The sound varies, of course, according to the source material. The older songs from the late Thirties and Forties are obviously in monaural and limited in their fidelity. Davis's orchestral parts, as I've said he conducted and recorded in Prague in 2003. Here, you will find a big, wide stereo spread, miked very close up. It displays a robust vitality, a wide frequency response, and good dynamic impact in percussive sections. Yet the sound is somewhat soft, round, and veiled, too, perhaps to help it blend in better with the older selections.

In any case, this 2010 album on the Carl Davis Collection label is a most-poignant affair, one that may have you shedding a tear or two, even if you're young and far removed from the actual War. The fact is, we're never far from war, and we need these kind of reminders of the pain and suffering that human beings seem always intent on inflicting upon one another.

Email ThisBlogThis!Share to TwitterShare to FacebookShare to Pinterest
Labels: Davis