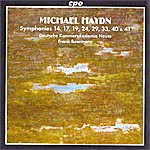 It must have been at least a little trying for court musician and composer Michael Haydn growing up and living in the shadow of his more-famous older brother, Franz Joseph Haydn. Yet Michael did pretty well for himself, composing more than 800 works in all the genres of his day. Of course, little of his work is as wholly inventive or delightful as his brother's and by comparison to the sheer number of recordings of his older brother's compositions, Michael Haydn's recorded output is relatively small, which is as it should be. While younger brother Michael has his moments, they are nowhere near as many or as memorable as his brother Franz Joseph's.

The present two-disc collection represents a fair assessment of Michael Haydn's abilities, containing eight of his symphonies and three of his marches, the set comprising part of an ongoing series of the composer's music on CPO Records. Let me run down the contents in the order of their arrangement on the discs. Starting on disc one are the Symphonies Nos. 33 and 29, both pieces quite festive, jocular, and jaunty. Following them is No. 19, which is more ceremonial than the first two; and closing disc one is Symphony No. 24, very lively and animated throughout. On disc two we find the little Symphony in F major, melodic and catchy; followed by Symphony No. 14, notable for its second-movement Adagio's bassoon part, probably the most affecting music in the entire set. Next, we get No. 17, for which the composer drew upon earlier material; and then Michael Haydn's last two symphonies, Nos. 41 and 40, both fairly brief yet charming and mature. The program concludes with three very short, two-minute Marches.

The German Chamber Academy Neuss, under the direction of Frank Beerman in the first seven symphonies in the set and Johannes Goritzki in the final five, play with precision, faithfulness, and accuracy above all. As a result, they can seem to some degree reserved, restrained, despite the generally quick tempos they adopt throughout. I have to admit there is a sameness about all of the music that makes listening to more than a couple of symphonies at a time a tad fatiguing.

CPO's sound, recorded in 2004 but only just released in late 2009, is warm and smooth to the point of appearing too refined. Although I would have preferred a little more sparkle at the high end and a little more bass at the low end, the sonics nicely complement the somewhat sedate and scholarly performances. Orchestral depth and instrumental transparency are modest, whilst left-to-right imaging is excellent.

The set also includes extensive booklet notes in English, French, and German to keep you busy should your mind wander.

Email ThisBlogThis!Share to TwitterShare to FacebookShare to Pinterest
Labels: Haydn.Michael