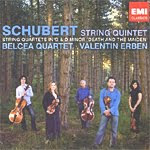 There is a good deal to recommend this new two-disc set from the Belcea Quartet and their guest, cellist Valentin Erben, not the least of which is the set's content. It includes some of the last chamber works Franz Schubert (1797-1828) wrote, and it turns out to be some of his most popular and most mature music.

Things begin with the String Quintet in C, D956, in which Valentin Erben lends additional weight to the proceedings with his cello. The composer's use of five instruments rather than four makes for a richer, more substantial-sounding piece. Schubert wrote the String Quintet in 1828, the last year of his short life, and it was his final chamber work of any kind. There is a longing wistfulness about all of the music; a wonderfully delicate Adagio that projects an ethereal state, with a surging, tempestuous center; and a closing Allegretto with a Gypsy-like flair. It provides a glimpse of what might have come had the composer lived longer. Next is the String Quartet No. 15 in G, D887, written in 1826, Schubert's last quartet. Although it is not his most-popular piece of music (the opening movement overstays its welcome), it is one of his most varied and emotional. Yet it is not exactly the kind of light, lyrical material we usually associate with the man. The set concludes with String Quartet No. 14 in D minor, D810, "Death and the Maiden," the dark, foreboding, highly charged work that remains among Schubert's most celebrated creations.

To say that the Belcea Quartet pull off all three compositions with style and refinement would be an understatement. Violinists Corina Belcea-Fisher and Laura Samuel, violist Krzyzstof Chorzelski, and cellist Antoine Lederlin appear more interested in nuance of expression than in flashy showmanship or extrovert bravado. With Schubert, this works perfectly, the slow movements especially characterful and sympathetic. Some of the Quartet's music-making can carry one away with enchantment.

Complementing the fine performances, the EMI sound engineers capture the players well spread out across the sound stage and close enough to the listener to simulate a live presentation a few dozen feet away. The engineers also secure well-defined instruments set amidst a realistically rendered acoustic, that of Potton Hall, Suffolk, during their recording sessions in 2009. The sonics tend to make the four or five performers seem perhaps a little larger than they probably appear live, but the effect nicely enhances one's listening enjoyment. With good clarity and transparency, without any hardness or glassiness, this is vintage EMI sound.

If there is any drawback to an otherwise splendid production, it's that the uncut performances necessitate No. 15 be spread over the two discs, the first movement on disc one and the final three movements on disc two. Ah, well, a minor inconvenience at worst.