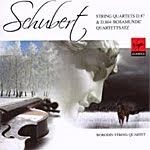 I've been listening to this 2008 reissued EMI/Virgin Classics disc quite a lot in the past year or so. The first few times, I was sitting in front of the speakers in the living room; another time I was eating breakfast and reading the paper. Is there ever a bad time to listen to Schubert? He was quite the prolific composer, and it's a shame he died in his early thirties as he could have given us so much more. OK; be grateful for what we have.

In any case, what we have here are quartets from his earliest and a later periods. The first item is the String Quartet No. 10 in E Flat, D.87, which Schubert wrote in his teens. It's lighthearted, and lightweight, and overflows with good cheer. The next, from 1820, is an unfinished piece, the Allegro Assai from a work he titled Quartettsatz. One has to wonder why he never wrote anything more around it. The third and most important work on the disc couldn't be more different from the first two; it's the String Quartet No 13 in A minor, D.804, known as "Rosamunde" because the composer recycled the second movement from his "Rosamunde" ballet music of several years earlier. D.804 is more solemn, more melancholy, more mature, and more original than the other two pieces, perhaps reflecting the man's illness at the time of its composition.

The Borodin String Quartet capture the changing moods of the three works effectively, and the EMI/Virgin engineers in a recording made in 1991 maintain the tone of the composer and his works in sound that is at once warm, slightly soft, full, yet reasonably clear. It's a pleasant album that I look forward to hearing many times over.

Beautiful music; beautiful playing; more than adequate sound.  And to make the deal even sweeter, I notice that dealers at Amazon are selling the disc new for around five bucks.  Half that if you want it used.  It's a tempting proposition.