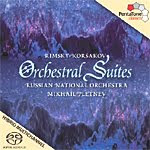 In the latter part of the nineteenth century, Nikolai Rimsky-Korsakov (1844-1908) was a part of the circle of Russian composer's known as the "Mighty Five" (the others being Mily Balakirev, Caesar Cui, Modest Mussorgsky, and Alexander Borodin). They aimed to produce a specifically Russian form of music, and certainly much of their influential output remains well known today, even if it's only in bits and pieces. For example, my guess is that beyond Scheherazade, Capriccio Espagnol, and maybe the Russian Easter Festival Overture, most casual listeners these days probably wouldn't recognize much by Rimsky-Korsakov. This present disc aims to rectify that situation, at least to a small degree.

Mikhail Pletnev and his Russian National Orchestra play suites of four and five movements each from three of Rimsky-Korsakov's operas. The operas themselves may not get performed much anymore, but the orchestral arrangements the composer himself extracted from them live on quite comfortably.

Things begin with the four-movement suite from the opera Snow Maiden. It's a short piece, about eleven minutes in all, but it's quite colorful, evocative, and entertaining, especially under Pletnev's elegant direction. It's mostly sweet, gentle music until the final movement, "The Dance of the Tumblers," which gets a bit more rambunctious.

Next up is Legend of the Invisible City of Kitezh, again in four fairly brief movements. More so than in Snow Maiden we hear the composer creating sound pictures, even to the chirping of birds in the background, and Pletnev emphasizes all the music's most pictorial elements. Although it may be lightweight, the music is quite charming, and Pletnev forges into the third-movement battle scene with relish, concluding the work with a richly embroidered "Funeral" sequence.

Finally, saving the best for last, Pletnev gives us the longest (five-movement) and most-memorable of the suites, "Night on Mount Triglav" from the third act ballet-opera Mlada. This suite has an almost Wagnerian scope to it, which Maestro Pletnev is quick to exploit. The music goes so far as to involve mortals and gods, as does much of Wagner's music. The difference is that Rimsky-Korsakov seems more interested in painting soft pastel watercolors than in creating vast Wagnerian canvases in oil. Here, we get visions of spirits and apparitions rather than thunderbolts and Valkyries. Pletnev lets all the guns loose, though, in the third movement "Witches' Sabbath" when the god Cernomor, the immortal Kashchei, and Cleopatra all appear. The action ends in a burst of sunset and then a relative calm.

PentaTone offer the sound in regular two-channel stereo, SACD stereo, and SACD multichannel on the same hybrid disc. The recording, made in 2009, comes up nicely detailed and with a reasonably good depth of field. There is little of the enshrouding fog we sometimes hear in SACD surround-sound recordings. There is, nevertheless, the faintest hint of low-frequency background noise noticeable on occason, usually during the quietest moments. A moderate dynamic impact and a wide stereo spread complete another fine recording from Pletnev and his players.