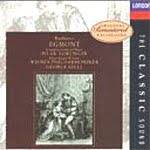 As I was listening recently to a new Naxos recording of Beethoven's complete incidental music to the play Egmont, I couldn't help thinking of and comparing it to George Szell's celebrated 1969 Decca rendering with the Vienna Philharmonic. Now, I thought it might be time to go back and mention that earlier disc because it is pretty special. Therefore, this is a new review of a 1996 remastering of a 1969 recording.

When Vienna's Royal Imperial Court Theater decided to stage poet and philosopher Johann Wolfgang von Goethe's play Egmont in 1810 (thirty years after Goethe wrote it), they asked Beethoven to write the incidental music for it. Today, we don't see much of the play or the full score of the music, although the Overture has a remained a staple of the classical repertoire.

With the Naxos disc, a little of the complete incidental music (beyond the famous Overture) went a long way, and some of it even became a tad tedious without the accompanying stage action, especially toward the middle of the work. But here, with Szell, things are different, and there is much in the music, singing, and narration to enjoy.  The Decca disc may presently be a little hard to find, as I believe it's out print, but it's so good it's worth tracking down.

The play itself is rather melodramatic, and Maestro Szell and the magnificent Vienna Philharmonic Orchestra play it up not only for maximum dramatic effect but for it subtlety as well. By comparison to other conductors in the work, Szell and the VPO are more highly charged in their music making. In other words, you'll find the opening Overture powerful, the march to the execution emotionally draining, and the closing "Victory Symphony" thrilling, with the quieter interludes in between totally charming.

Soloist Pilar Lorengar cannot be faulted, her singing voice in the several vocal numbers exquisitely sweet and pure yet appropriately forceful. I hadn't remembered that the Szell disc included so much of the narration between each number, and narrator Klaus-Jurgen Wussow is positively inspired; I don't speak a word of German (the booklet insert contains translations), yet I loved just listening to the man speak. What with the orchestra's lofty playing, the soloist's poignant performances, and Szell's sublime conducting, this is a disc gets my highest-possible recommendation.

As far as Decca's sound is concerned, recorded in the Sofiensaal, Vienna, it is highly dynamic, very clean, and exceptionally clear, with strong dynamics, a wide stereo spread, a solid impact, and a quick transient response. The orchestra is never unduly hard, harsh, or forward, the orchestral soundstage lacking perhaps only the last degree of depth and ambience. Although Ms. Lorengar's voice is a touch metallic at times, this is hardly even a quibble on my part.

Great music.  Great performance.  Great sound.  What do you think?  Do I like it?