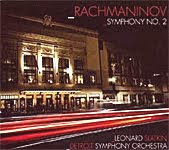 It is quite a feather in Naxos's cap to have so distinguished a conductor as Leonard Slatkin, now Music Director of the Detroit Symphony Orchestra, recording for them. Slatkin had long been associated with RCA, EMI, and other labels, where he made over 100 fine recordings. Naxos acknowledges the present disc, one of several Slatkin has made for them over the past few years, by affording the jewel box its own slipcover, always a sign of a prestige product.

This time out, Maestro Slatkin tackles that twentieth-century holdout of old-fashioned Romanticism and mainstay of the basic repertoire, Rachmaninov's Second Symphony (1908). Above all, the Symphony demands fervor and passion, which, for better or for worse, Slatkin serves up only in brief moments of enthusiasm. Mostly, the conductor gives us a secure run-through, emphasizing the work's more lyrical elements rather than its splashier dramatics.

So the brooding first movement is just that: more meditative, thoughtful, and subdued than electrifying. Slatkin begins to hit his stride in the quicker second-movement Scherzo, though, where the temperature rises significantly from the preceding segment. Following that, the Adagio comes across with an abundance of wistful longing, and it's here that Slatkin is at his absolute best. Although his tempo is actually a touch fast for my taste, he imbues the music with an appropriate melancholy.

In the Finale, marked Allegro Vivace, Rachmaninov seemed determined to out-Tchaikovsky Tchaikovsky with a huge, theatrical production. Slatkin gives it his best shot, while maintaining some degree of decorum until the very end, where he plainly gives in to the composer's demand for plenty of juice.

I would count Slatkin's interpretation as very good, without quite reaching the intensity of, say, a Previn (EMI), a Jansons (EMI), or a Rozhdestvensky (Regis). As a fill-up, we find Rachmaninov's Vocalise, also well rendered.

Naxos recorded the performances in Detroit's Orchestra Hall during live sessions in September of 2009, where they obtained a dynamic if not entirely transparent result. OK, I admit I'm still spoiled by all those old Mercury recordings of the Detroit Symphony from the Fifties, so wonderfully remastered some years ago on CD and SACD. By comparison, the Naxos disc sounds firm and clear but a little tame, despite a couple of solid bass whacks.