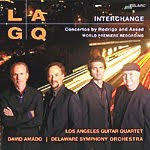 This CD from Telarc is a "first" of several kinds: It's the first recording of a concerto by the Los Angeles Guitar Quartet; it includes the world-première recording of Sergio Assad's Interchange for Guitar Quartet and Orchestra; and it's the compact disc debut of the Delaware Symphony Orchestra. Oh, and there's also Joaquin Rodrigo's celebrated Concierto Andaluz at the center of things.  Not a bad deal.

The program begins with Rodrigo's Concierto Andaluz, a work the composer wrote in 1965 expressly for the Romeros, the first family of guitar virtuosos. Naturally, I used their old Mercury (1967) and Philips (1978) recordings of the Concierto as comparisons and did not find the LAGQ's version lacking. The LAGQ are, if anything, even more intense than the Romeros in the opening movement, marked Tempo de Bolero. Although the tempo seems at first a little too fast paced, it quickly grows on you. Then the LAGQ attend to the charming Adagio that follows, lovingly molding and caressing it in a way that would make any of their mentors among the Romeros proud. Finally, they launch into the closing Allegretto with enthusiastic vivacity, again taking the music at a healthy clip.

After Rodrigo's Concierto, we get Brazilian composer Sergio Assad's Interchange, which he wrote expressly for the LAGQ and whose content exactly matches the composition's title; namely, it's about the casual meeting of people on a four-level L.A. freeway interchange, the movements themselves referring to various roads and driving. The piece interweaves different musical styles from Brazilian to Spanish to Asian and Jewish, from Hollywood to jazz and blues, all of it tailored to the individual members of the Quartet.

Interchange gets off to a rousing start with "Sephardic Passage," a movement that reminds one of something by Rodrigo with a kind of Hebrew overlay. Frankly, I was afraid that the new work was going to be one of those contemporary, atonal, cacophonous, avant-garde things, but it isn't. It falls squarely into the traditional classical framework and should be highly accessible to most modern listeners.

I loved the flamenco and percussion elements of the second movement, "Gypsy Slopes," suggesting, perhaps, the ebb and flow of traffic. The quiet central movement, "Pacific Overlook," brings a note of tranquility to the proceedings with a pleasantly lilting melody; and that's followed by an even more leisurely jazz-inflected segment, "Forroblues Detour," that picks up steam as it goes along with an infectiously pulsating beat. Interchange concludes with a brief, colorful finale, "Crossings," that combines thematic threads from the four preceding movements.

As I say, the Los Angeles Guitar Quartet along with Maestro David Amado and his Delaware Symphony Orchestra play the music as affectionately as one could want, combining commitment with fluency, grace, and high good spirits. And Telarc's audio engineers do their part in bringing the affair to disc with sound that is at once warm and smooth yet rich and acceptably detailed. While the stereo spread unfolds widely between the speakers, the four guitars appear nicely integrated into the whole without being unduly forward or engulfed by the orchestra. Still, as sweet as the sonics are, I kept wishing the Telarc disc possessed the kind of transparency and air displayed by the old Mercury recording of the Romeros. Ah, well, we trade ultimate definition for a realistically ambient bloom. Fair enough.