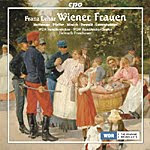 Hungarian composer Franz Lehar (1870-1948) is the fellow who gave Johann Strauss, Jr. a run for his money, or, if you will, succeeded the Viennese waltz king and continued on for many decades after Strauss's death. Lehar produced a number of charming operettas, the most familiar of which are probably The Merry Widow (1905), Count of Luxemburg (1909), and The Land of Smiles (1929).
What we have here, though, is Lehar's 1902 operetta debut, Wiener Frauen ("Viennese Women"), a delightfully lightweight affair that seems at any moment to be lifted by a breeze and float off into the distance. Or maybe this is simply the way Maestro Frschauer and his company perform it. I rather suspect they give it their all, and all was not quite enough to lift it to any substantial heights.
For listeners unfamiliar with the work--and that would include most of us since I'm not sure how often it's ever been recorded before, even in highlights--Wiener Frauen is typically comic and slight. It starts with a rather lengthy overture almost ten minutes long that contains the essence of the music, and much of it is quite appealing. Unfortunately, CPO do not include a libretto with this highlights disc, so you'll have to figure out what's being sung on your own. But they do include a booklet insert that lays out the general outlines of the plot. Or you can just do as I did and enjoy the delicious melodies and waltzes, many of which point toward Lehar's later music.

The sound is another matter, however. While there is nothing wrong with it per se, a digital recording made between 2003 and 2005, it doesn't really sparkle, which is a shame because the music itself certainly does. The low end could be deeper, the midrange could be more transparent, the highs could be more brilliant, and the stage imaging could be deeper. In its favor, voices are smooth and natural.

Oddly, perhaps, the disc also includes two overtures (Der Gottergatte and Wo die Lerch singt) recorded in 1971 and 1972 that sound better than the newly recorded operetta. The 1971 recording in particular has greater presence and dimensionality. I guess not everything improves with age.

Email ThisBlogThis!Share to TwitterShare to FacebookShare to Pinterest
Labels: Lehar