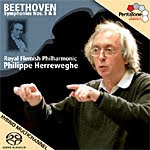 Beethoven's Fifth Symphony is probably the single most recognizable piece of music ever written, at least its first movement, and justifiably so.  It combines memorable tunes with tension and drama galore, raises one's spirit, and rushes the adrenaline. Which is exactly the way Philippe Herreweghe approaches it, directing his Royal Flemish Philharmonic Orchestra as he would any of the period-instruments groups he has lead over the years.

Herreweghe's Beethoven Fifth comes over with vigor, with verve, with energy in abundance, as he takes dashing tempos and accents the music at every opportunity with a theatrical panache that never sounds breathless or exhausting. He'll have your blood racing, almost in the way we think of Kleiber (DG) or Reiner (RCA) or the new Barenboim (Warner) doing it but without quite the voltage. OK, maybe it's more like Zinman (Arte Nova), actually, or possibly Norrington (Virgin), which is still saying a lot. Anyway, it is anything but conventional, and I liked it.

PentaTone's sound is also good, whether you choose the regular stereo layer or the slightly cleaner and more dynamic multichannel SACD layer. The sonics remain quite smooth and natural, with plenty of bite and a bass drum that must have been recorded with a mike six inches away.

That said, I didn't care as much for the accompanying Symphony No. 8.  While the Fifth is all restive excitement and emotion, the Eighth should be a relative island of repose, replacing the Fifth's spectacle with outright charm. However, Herreweghe seems determined to prove that the Eighth is not as lightweight as some people claim, and I found his reading rather heavy-handed. Even the sound seems too thick for the occasion. Still, having so good a Fifth may be reason enough for rejoicing.