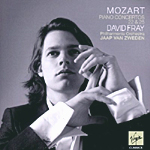 French pianist David Fray is one of those fellows who looks a lot younger than his age, so don't be put off by his youthful appearance on the disc's cover photo. He was actually around thirty when he made these recordings. More to the point, I had never heard the man play until now, and I was curious about his attitudes and abilities. Even though his Mozart interpretations did not overwhelm me, I could readily understand his intentions, and there is no doubting his artistic skills.

Fray begins with Mozart's Piano Concerto No. 22, K.482 (1785). Here, we see Mozart in an amusingly lighthearted yet lyrical mood, much of which Fray conveys handily (he's quite virtuosic). However, it's when one compares his performance to those of Daniel Barenboim (BR Klassik) or Murray Perahia (Sony) that one notices a slight lack of spark, geniality, or joy from Fray. I don't hear the same playfulness or vitality in Fray's playing that I do in the other artists, although I have to admit that the Virgin engineers recorded Fray marginally better. Certainly, there is nothing wrong with Fray's interpretation per se, except that it is a little straightlaced.

Then it's on to the Piano Concerto No. 25, K.503 (1786), where Fray seems to me more successful than in No. 22. The piece is more dramatic, and Fray communicates its operatic theatricality most clearly. One can hear fairly easily the connections to the composer's Die Zauberflote, which he wrote a few years later, with Fray doing his best to play up those ties. The concerto's Andante exhibits an appropriate dignity, but the concluding Allegretto is a tad too sober for my taste while nevertheless voicing a pleasant sense of delicacy and passion throughout.

The Philharmonia, always one of London's most refined orchestras, provide able-bodied accompaniment under the guidance of Maestro Jaap van Zweden. Still, I found myself wishing the orchestral support had been a tad more spry and lively and a bit less refined or able-bodied.

Virgin recorded the music in Abbey Road Studios, London, in August of 2010. The sound is pleasantly reverberant, smooth, and well balanced. The engineers capture the piano in an almost ideal position relative to the orchestra, with just enough bloom on the instruments to simulate a live experience without the annoyances of an actual live performance. Dynamics and frequency range are adequate to the occasion, and overall definition is fine.