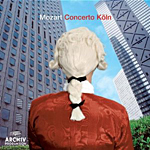 Over the past quarter century or more, I have come to respect and in some cases love the performances of period-instruments bands. But it does seem to me that they can sometimes put such a stress on what they consider authenticity, they lose sight of the fundamental warmth of a piece. Thus it is with some of the work I've heard from Concerto Koln.

The members of the ensemble play with vigor and enthusiasm, and they appear to play flawlessly. Yet too often on this album of short, diverse Mozart works, they seem to be racing Europa Galante to the finish line. The playing is stimulating, sometimes heart pounding with excitement, while at the same time draining the music of much of its charm. OK, perhaps one has to give up sometime to gain something else, and certainly at the pace Concerto Koln perform these works they set themselves apart from most others. But it doesn't mean everyone has to like it.

Things begin with the overture to Mozart's opera Die Zauberflote, and it's here, right at the start, that we notice the direction the musicians are taking. They are clearly going for an adrenaline rush and, I believe, they are missing Mozart's innate charisma. For instance, The Magic Flute is just that, a magical journey filled with an assortment of fascinating enchantments, yet Concerto Koln play it at something more like a concerto rock: Big, long pauses, enormous dynamic contrasts, and breathtaking tempos. The proceedings slow down a bit with excerpts from Le Petits Riens and the Adagio from the Serenade in B flat major, but then it's off to the races again in the Divertimento in D major. The overture to Der Schauspieldirektor has the effect of a blockbuster, and Eine kleine Nachtmusik seems purposely aimed at being anything but than traditional.

I suppose one can say these performances make people listen to the music with new ears (note the album cover), but, then, that isn't always what people want in their Mozart.

While it is easy for me to nitpick the interpretations, I can hardly fault the sound. It is natural, well balanced, and generally clean and clear, with a nice sense of breadth and depth for a group of musicians less than twenty strong. It is only when comparing the Divertimento in D to Marriner's old account remastered on an FIM XRCD that one notices that maybe the new digital recording could be a tad more open and transparent. The FIM will knock you over, and Marriner's reading is every bit as spirited and lively as Concerto Koln's, yet at the same time it is elegant and refined. So, yes, other folks have shown they can do it.