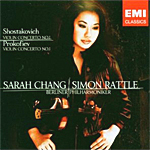 You'd think the First Violin Concertos by two of twentieth-century Russia's premier composers would be pretty much alike, especially as both Shostakovich and Prokofiev before him were in the vanguard of the modernist music movement. Wrong. The works couldn't more dissimilar.

Dmitri Shostakovich completed his Violin Concerto No. 1 in 1948 as a protest against Soviet repression, among other things, but nobody performed it publicly until 1955 because the Soviet government branded the composer an enemy of the people for writing music that did not conform to the state's puritanical tastes. The Concerto is understandably harsh, beginning with a dark, ominous bass passage, followed by vigorous sections of bottled-up rage, a somber Andante, a relatively ferocious Cadenza, and an energetic Burlesque finale.

Sergei Prokofiev completed his Violin Concerto No. 1 in 1917 but had to wait for the Russian Revolution and its aftermath to hear it performed in 1923. So much for similarities. Where the Shostakovich work is fairly long--five movements and almost thirty-seven minutes--the Prokofiev is brief--three movements and about twenty-one minutes. More to the point, the Prokofiev concerto is as light and airy as you could imagine, almost wispy in places, and filled with a lilting playfulness, lyricism, and good cheer.

So, you might say one piece is a tragedy, the other a romantic comedy, and that's how violinist Sarah Chang plays them, pointing up the differences in temperament and style as much as possible. My own reaction is that she is more successful in the Prokofiev than in the Shostakovich, where her performance of the music doesn't seem quite as markedly pointed or biting as I've heard it interpreted. But I doubt that anybody is going to notice, let alone complain, especially not with such impeccable support by Sir Simon Rattle and his Berlin orchestra.

Nor can one complain about EMI's sound, which the jewel box says derives from live recordings but which surely don't appear to be live. There is no audience noise whatsoever that I noticed (understand, I was caught up in the music most of the time), no applause, and no close or distant miking. The orchestra spreads out smoothly and naturally behind the soloist, presenting a most realistic sound stage. It's a fine production all the way around.