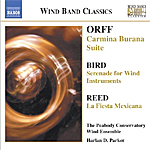 My first thought before listening to this disc was how the already rowdy Carmina Burana by Carl Orff (1895-1982) would sound played by an all-wind band, the vocal parts revised for instruments (arranged for concert band by John Krance). I mean, Orff's twentieth-century updating of medieval songs normally requires a full orchestra, several choruses, and a host of soloists. Would a wind ensemble do it justice or just inflate its coarseness? I'm pleased to report that Harlan Parker and his seventy-odd Peabody Conservatory players do no harm to the piece and in most ways create a new and engaging rendition of an old favorite.

This is by way of saying that you'll recognize the music instantly and find each movement in the twenty-seven-minute suite revealing something you perhaps hadn't thought of before. The Peabody Wind Ensemble of John Hopkins University play with precision, if not with the complete zest and joy that I have heard from some major orchestras; in other words, they sound like they are maybe a little reticent about committing too much enthusiasm to a set of songs that requires a bit more earthiness. They are not stuffy, by any means, but they don't have the robust, unaffected air I find in, say, Previn's EMI recording, Blomstedt's Decca, or Jochum's DG.

Anyway, the Orff piece is just the most-familiar item on the disc; the album also contains a small-scale chamber work, Arthur Bird's Serenade for Wind Instruments (1898), which is quite charming, if forgettable; and Herbert Owen Reed's La Fiesta Mexicana (1954), a wonderfully varied and robust piece of music that has a little something in it for everybody, including a striking opening movement with trumpets and simulated fireworks.

It took a moment or two for me to adjust to the Naxos sound. At first, I thought it was a bit boisterous. A couple of minutes later, it seemed to fit the music. About halfway through the Orff, I realized it was not only appropriate, it was almost perfect. And by the beginning of Reed's La Fiesta, I thought it was downright spectacular. There is a picture of the ensemble in the booklet insert, and that's almost exactly what the sonic image sounds like: eight-to-ten players per row and about six rows deep, recorded at a modest distance. Depth of field is excellent; dynamics are strong; and clarity is more than acceptable. It's a topflight recording to complement a set of splendid performances.

Email ThisBlogThis!Share to TwitterShare to FacebookShare to Pinterest
Labels: Orff