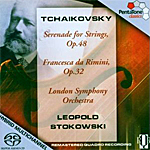 I know I've mentioned this before, but it bears repeating so stick with me. In the 1970s, Philips and several other record companies jumped on the quadraphonic bandwagon and made a number of recordings in four-channel sound. However, because of the limitations in playback equipment back then, it was difficult to appreciate the advantages that multichannel sound brought to the table. Philips eventually released their quad recordings in ordinary two-channel stereo and laid the multichannel tapes to rest. Until more recently, that is, when SACD opened the door once again to multichannel audio.

This Stokowski/LSO release of works by Tchaikovsky comes from 1974, and for the first time since its recording Pentatone Classics present it in its original four-channel configuration. Unfortunately, neither the SACD sound nor the Stokowski performances are anything to write home about. Playing the recording in SACD, I thought the audio more than a little soft, round, billowy, and overblown. Moreover, I found the performances of both the Serenade for Strings and the tone poem Francesca da Rimini less than inspired. However, it isn't that Stokowski doesn't take the works at a quick enough tempo, bring out enough beauty, create enough excitement, or play without enthusiasm. Stokowski does. It's just that despite everything, the performances seem perfunctory, ordinary, which is something wholly uncommon to a conductor like Stokowski.

One has to remember, though, that Stokowski was in his nineties when he made the recording, just a few years before his death. Although he had not lost his zest for conducting, he may have lost just a little something in the way he shaped the works. The best example of this is a comparison of the newer recording of Francesca da Rimini with one he made in 1959 with the Stadium Symphony Orchestra of New York (the summer festival name for the New York Philharmonic), last issued on a 20-bit remastered Everest disc (EVC 9037). Of course, Stokowski was still a youngster at the time, merely in his late seventies, but he filled his reading back then with more life, more vigor, more robust tensions than he did in 1974. And the interesting thing is that the earlier recording is almost a minute longer than the newer one, so as I said, it's not a matter of the old man slowing down.

Furthermore, the earlier, 1959 stereo recording sounds more transparent and more dynamic than the 1974 one reviewed here, possibly because it doesn't have the four channels to contend with. Anyway, I doubt that anyone will mind the Pentatone SACD (a hybrid, by the way, that one can play back on a regular CD player in two-channel sound), and Stokowski fans will want it in any case.