For all their sorrow, anguish, triumph, and heavenly revelations, I can't help getting the feeling there is less to Mahler's symphonies than meets the eye. Or ear. But there's no denying they're fun; something for everyone to interpret and discuss. 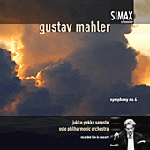 The Sixth Symphony (1904) of Gustav Mahler (1860-1911), though, always seems more problematical to me than the others, a kind of black sheep--dark and depressing--of the family. I mean, the composer didn't initially call it "Tragic" for nothing. It was never popular in Mahler's time, and it really took someone like Leonard Bernstein in the early Sixties, wearing his heart on his sleeve, to help people finally notice it.

Coming second in Mahler's middle trio of purely orchestral symphonies, the Sixth tends sometimes to get lost in the mix. Or maybe it's that sorrowful outlook that puts listeners off, I don't know. In any case, conductor Jukka-Pekka Saraste and his Oslo Philharmonic provide a performance as Mahler originally envisioned it, with the Scherzo second and the final hammer blow intact. Whether the performance adheres to everyone's idea of how the work should flow or how well it explores Mahler's conflicting moods of love and death, doom and gloom, is up for grabs.

The opening Allegro energico is a huge march movement, perhaps a defiant funeral procession. Saraste handles this section in almost a fiercely aggressive manner, the headlong rhythms pounding on ever forward. In between the music's relentlessly agitated states, we find some brief respite in a pastoral scene that Mahler described as "the last greeting from earth to penetrate the remote solitude of the mountain peaks." Saraste negotiates the transitions well enough, although I really never felt the emotion of the "Alma" theme as much as I have with other conductors.

Saraste then places the Scherzo second, as Mahler had originally arranged things before changing his mind several times over. It's a somewhat raucous parody of the opening movement, and I find it too similar to the first movement to provide much contrast when placed directly behind it, especially the way Maestro Saraste deals with it. It sounds too much like a continuation of the first movement, making one very long section. There's no letup in the intensity, and Saraste never seems to exploit the movement's more bizarre elements to much advantage.

The lovely Andante is about as different in tone from the first two movements as you can get, yet Saraste seldom lingers long with any part of it or sentimentalizes it in any way. Still, I again didn't always feel the passions in the music. It comes across as too matter-of-fact to me.

The long closing Allegro moderato is almost like a separate work unto itself. It's here that Saraste is probably most effective in keeping the disparate elements together and not letting the recurring "fate" motifs overwhelm the proceedings. And, yes, as I said, he includes Mahler's third and final hammer blow.

The sound, recorded in a series of live concerts during March of 2010 in Oslo Konserthus, is slightly close, exhibiting some good orchestral depth. Oddly, however, the sound stage doesn't appear as wide as it should be at that distance, and it's also a tad bright, forward, lean, and sharp-edged, the bass coming alive mainly during the hammer blows. For what it's worth, the audience is commendably quiet most of the time, with only an occasional cough and wheeze in evidence and, thankfully, no ending applause.