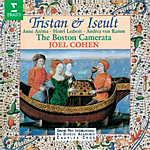 Tales of the brave Cornish knight Tristan (alternatively, Drystan, Tristrem, Tristram, depending on the country of origin and/or the translation) and his ill-fated love for the Irish princess Iseult (Isolde, Yseult, Isode, Isoude, Esylit, or Isotta) have been around at least as long as the Arthurian legends, maybe before them, meaning that bards, prose writers, poets, and singers have told and retold the legends many times over for the past 1500 years or quite possibly longer. Although the original storytellers set their accounts in Cornwall, probably nobody wrote them down (nobody we know of) until hundreds of years later, mainly French and German writers before the English took them up again.

What we have under review here is a recent Warner Classics reissue of the award-winning 1987 Erato recording (it won the Grand Prix du Disque in 1989) of medieval poems, songs, and music associated with the Tristan and Iseult legends, compiled by Joel Cohen and played by The Boston Camerata. It certainly makes for different and fascinating listening.

According to Maestro Cohen in a booklet note, "The Camerata has chosen to return to the oldest surviving sources for this program. You will hear some central elements of the story almost exactly as they were narrated in the Middle Ages in Germany and France. In our presentation, certain passages of the narration are spoken; others are sung to melodies of the same period, as was often the case with narrative poetry during the Middle Ages. All the music is drawn from manuscript sources of the early and later medieval period; about half of these songs were already associated with the 'Tristan' legend at the time, and the others are closely related in mood and content."

The music begins with an anonymous prologue, partly instrumental, partly recited, which sets the temper of the tragic romance in a lyrically atmospheric manner. From there we get an eclectic assortment of instrumental, ensemble, and solo pieces, mostly plaintive, melancholy, some bright and sprightly, each connected by narration, twenty-four selections in all, ranging from under a minute to over six minutes apiece.

The overall tone of the music, not surprisingly, sounds Celtic and most of the narration Germanic, French, and Old English. Countertenor Henri Ledroit is a particularly becoming Tristan, Anne Azema a tender Iseult, Richard Morrison a convincingly lusty King Mark, and Andrea von Ramm a sensitive narrator.

While I don't think anyone would mistake this collection of medieval music for Richard Wagner's celebrated opera, it does have the merit of at least some degree of authenticity. And you can hardly beat those ancient settings of the texts. It's fun in a fresh and pleasant way.

Erato recorded the program in September of 1987 at the Church of the Covenant, Boston, Massachusetts. Even though the sound is fairly close up and somewhat one-dimensional, it has the advantage of exceptional naturalness and clarity. Voices, which on many recordings can appear bright and forward, here seem just right--smooth yet vivid, with ensemble vocals given a small degree of room resonance for an effectively realistic ambience. Transient attack is quick and sharp, rendering the whole affair easy on the ear.