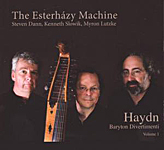 First things first: What is a baryton, and what the heck is an Esterhazy Machine?

A baryton, according to my Random House Dictionary, is "an 18th-century stringed instrument with six bowed strings and several additional strings that vibrate sympathetically." The disc booklet amplifies on that, saying that "Leopold Mozart, Wolfgang's father, described it as 'one of the most charming of instruments. Like the gamba, it has six or seven strings. It has, however, a very wide neck, the back of which is hollow and open and into which nine or ten brass and steel strings are inserted, which may be plucked by the thumb while the principal part is played with the bow on the gut strings.'"

The baryton was a favorite instrument of Hungarian Prince Nicolaus Esterhazy, a patron of composer Joseph Haydn (1732-1809), and, as a result, among Haydn's prodigious output of 104 symphonies, 68 string quartets, numerous oratorios, masses, sonatas, concertos, operas, and songs, we find some 170 works for the baryton, 123 of them trios for baryton, viola, and cello like the ones recorded here. (The fact that the Smithsonian folks mark this release as "Volume 1" may indicate they intend to record even more such collections. They certainly have enough material.)

The five trios for baryton presented on this disc range from brief (about nine minutes) to less brief (about twenty-two minutes), generally in traditional three-movement arrangements, with one of them, the Trio in D major, Hob. XI: 97, in seven movements (written longer in honor of Prince Esterhazy's birthday). In common they exhibit a pleasant, relaxed tone, much of it sweet, pastoral, witty, and serene. The trios are exceptionally tranquil and totally delightful.

The three players, using period instruments (or in the case of the baryton, a facsimile), provide comfortable, gracious, refined interpretations of the music. As each man is a well-established artist individually, the question I had going in was how well they would perform as a group. Obviously, the answer is sensationally well. The three instruments emerge as one, with rich, luxuriant textures provided by the baryton, and the accompanists blending in seamlessly and effortlessly. The ensemble play as one, as though born to the music, which they never rush and never make less than enjoyable.

Recorded at Dekelboum Concert Hall of the Clarice Smith Performing Arts Center, University of Maryland at College Park, in 2004, this 2010 Smithsonian FoM (Friends of Music) release sounds splendid. Like their other recordings, this Smithsonian issue provides enough hall resonance to give one the feeling of being in the room with the players, yet there is never so much reverberation that it obscures inner detail or transparency. These are immaculate aural presentations that never spread the ensemble out too widely but give them just enough distance left to right and front to back to produce an almost uncanny realism. The warm acoustic suits the mellow style of the music, the disc's audiophile quality a pleasure to the ears.