Twilight of the Romantics (CD review) 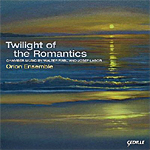 For those listeners longing for the strains of serious Romantic, lyrical, tuneful, melodious music they don't already have many times over in their collections of basic-repertoire items, there is still hope. The folks at Cedille Records offer this disc of première recordings by composers Walter Rabl (1873-1940) and Josef Labor (1842-1924). Obviously, neither man is a well known composer, but that's the point, and they are both worth a listen.

Things start with Rabl's Quartet in E-flat major for Clarinet, Violin, Cello, and Piano. It's a piece he wrote as a young man in 1896 for a competition of the Vienna Musicians' Society, whose honorary president at the time was Johannes Brahms. The Quartet won first prize, Brahms greatly admired it, and then people quickly forgot it, possibly because Rabl himself quit composing music shortly thereafter and turned his attentions to vocal coaching and conducting. In any case, the Quartet is a lovely piece, reminiscent of the work of Schumann (and Brahms). It's fairly simple in its traditional four-movement execution, but the melodies spill forth in abundance, and one cannot help feel the piece's serenity and good cheer.

Then we get Josef Labor's Quintet in D major for Clarinet, Violin, Viola, Cello, and Piano, from around 1900. It, too, sounds as though it had a strong connection to Brahms, and it is, if anything, even more dreamily Romantic than Rabl's piece. Why the public neglected it is anybody's guess. The booklet note suggests that perhaps Labor's "blindness may have limited his ability to disseminate and promote his works." Anyway, like Rabl's Quartet, the clarinet dominates Labor's Quintet, the clarinet a wistful, sometimes mournful instrument if ever there was one, and in both pieces it works its magic in still, quiet, longing Adagio movements and energetic, rhythmic Allegros.

The Orion Ensemble, consisting of five accomplished female musicians, play with refinement and grace; and, as always, Cedille's chief engineer, Bill Maylone, captures the sound in a wholly natural and realistic setting. The delineation is a tad on the soft side, but it only serves to emphasize the Romantic nature of the music.

Email ThisBlogThis!Share to TwitterShare to FacebookShare to Pinterest
Labels: Rabl