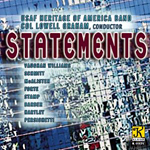 Almost any music for a wind band, save possibly marching music, may be an acquired taste, and it's a taste I admit I have not quite fully acquired. Nevertheless, when a group plays the music as well as it's played here by one of America's top-notch wind ensembles and a company records it as well as recorded here, it's hard not to appreciate its power and eloquence. Even though I didn't particularly care for some of the compositions on the disc, the United States Air Force Heritage of America Band, conducted by Col. Lowell Graham, make a strong case for this kind of music, and a case that's hard to knock.

The nine short selections for wind band presented on the album all derive from the twentieth century, with many of them from the latter half. So these are fairly modern "Statements," as the disc's title suggests, not special arrangements of eighteenth or nineteenth-century creations. Varying in length from about one to sixteen minutes, the compositions comprise a well-rounded, representative selection of music for the genre.

The program begins with two selections from English composer Ralph Vaughan Williams (1872-1958): "Flourish for Wind Band" and "Toccata Marziale," both of them sounding traditional but enlivening.  Following them we hear a more ambitious piece by a less well-known contemporary of Vaughan Williams, Florent Schmitt (1870-1958) called "Dionysiaques," which offers up a wonderfully festive mood.

Next, we get three more-recent pieces written especially for Col. Graham and the USAF Heritage Band:  Clark McAlister's "A Summer Flourish," Aldo Forte's three-movement "Dance Suite on Spanish and Latin Rhythms," and Jack Stamp's "With Trump and Wing." Of the three, I enjoyed the takes on Spanish and Latin rhythms best and could easily recommend the disc for this suite alone.

After those numbers, we get the "Commando March" by Samuel Barber (1910-1981), a rousing foot stomper; followed by another piece written for the Air Force Heritage Band, this one a four-movement symphony by Vincent Persichetti (1915-1987) called Symphony for Band (No. 6). It's the longest (sixteen minutes, still short) and most serious of the works on the disc. As such, it seemed to me the least interesting.

Klavier issued the present 24-bit digital recording in October, 2010, taken from sessions made between 1994 and 1996 and mastered by noted audio engineer Bruce Leek. It is as ideal a wind-band presentation as you'll hear: smooth, dynamic, and wide-ranging, with plenty of hall bloom, a broad stereo spread, and an excellent sense of depth. Midrange clarity is outstanding, while bass is deep and taut and highs well extended. It makes an easy audiophile selection.