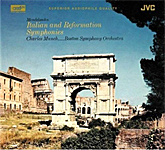 There is certainly no dearth of good Mendelssohn Fourths available these days (Abbado, Blomstedt, Sinopoli, and Klemperer are among my favorites), but one of the earliest great stereo versions and one of my first recollections of the piece is this one by Charles Munch and the Boston Symphony, recorded in 1958. Coupled with an equally good Mendelssohn Fifth Symphony from 1957, the album would be an easy recommendation if it weren't so expensive. But you get what you pay for.

Munch's interpretation of the "Italian" Symphony has all the forward drive you could want, with plenty of adrenaline flowing in the famous first movement. What surprised me, though, was how much I liked the accompanying "Reformation." I don't suppose it should have surprised me; it's a splendid piece of music. I just keep thinking of it in terms of its slow, grave opening movement, rather than its wonderfully light second movement Allegro, a movement that harks back to the "Scottish" Symphony in its delightful, folksy simplicity. Needless to say, Munch makes the most of it.

RCA make the album available in their "Living Stereo" line, but if you're willing to look for a European import, JVC offer it here, remastering it as well or better than it has ever been available to the public before. Like other Munch editions, there are things to like about the sound and things maybe not to like. It is an exceptionally vivid recording, with plenty of clarity in the midrange and treble and some solid, well-defined bass. On the minus side, it can also be a tad hard and bright. And like many of RCA's "Living Stereo" recordings of the time, there is a wide stereo spread that sometimes borders on leaving a hole in the middle.  (Although it doesn't, it can seem that way.) During quieter passages you may also notice some noise; not tape hiss exactly but more like tape deterioration. Most of the time it's masked by the music itself, so it's not much of a distraction.

I said it was expensive: A list price of about $36 for a single disc holding fifty-three minutes of music, total. JVC take a good deal of care in their remasterings, and they make you pay through the nose for it. Still, they're making what to my ears are some of the best-sounding masterings of classical music around. This one from Munch is a classic from way back, and paying the price may one's only chance of getting it done absolutely right.  Or, at the price, you'd better convince yourself it's right.