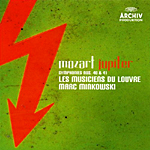 Anyone wishing to own a recording of Mozart's final two symphonies played on period instruments before a live audience could do worse than Marc Minkowski's performances with the Musicians of the Louvre.

Yes, the readings are smooth and passionate and lovingly played. No, they are not particularly "revolutionary." Minkowski does take them at mostly a brisk tempo, however, with a good deal of gusto from the tympanist playing in the "Jupiter." There are also what have to be the longest breaks between movements I've ever heard on a recording or in a concert hall, some ten-to-fifteen second breaks, in fact. That was the only annoying part of the proceedings.

As far as the sound is concerned, it's fine, especially considering its live origins. There is no audience noise, and unless I had read the cover blurb stating that it was "Recorded live at the MC2: Grenoble," I would not have guessed. Thankfully, there is no applause involved. However, the sound is a trifle dull unless you turn it up a bit. Even then, it is not very transparent or dimensional, a thin veil shrouding a lot of the high end. But, as I say, the tympanist does have his way with things, banging away full throttle and creating quite a sensation.