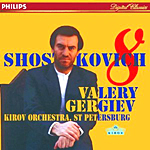 What is clear is that if you already own Previn's 1973 EMI recording of the Shostakovich Eighth, you probably don't need any others. It is still among the best performances and best recordings available. If you don't own it or can't get it, this one by Valery Gergiev and the Kirov Orchestra (and several other alternatives) may fit the bill. What is unclear is why Philips rereleased this 1995 Gergiev recording a couple of years ago at full price after releasing it originally in 1996.

Shostakovich premiered the Symphony No. 8 in 1943, and critics consider it the composer's great war epic. However, Shostakovich considered the work to represent not only World War II but the Soviet Union itself, which may explain why the Soviet authorities immediately banned it. The symphony's unrelentingly pessimistic tone and turbulent harmonies led the government to denounce it as decadent and degenerate, unfit for the masses, and it was many years before the work got its proper recognition. Well, it certainly wasn't Tchaikovsky.

Any recording of the Eighth must not only evoke the massive emotional turmoil of war, but it must also compete against one of the most remarkable interpretations of our time, the aforementioned Previn performance. Not even Previn's own newer DG remake quite captures the urgency of the older recording, so it is with some pleasure that I so enjoyed the success of Gergiev's new release, which is almost as good. Almost. But as powerful as it is, the Gergiev recording still doesn't quite capture the sense of overwhelming doom and devastation that the older Previn disc does. This is particularly evident in the middle movement's pulse-pounding rhythms and the Largo's sinister overtones, which Previn makes just that much more gripping than Gergiev does.

Nor does the Philips sound appear quite so focused, markedly deep, or well imaged as EMI's. The newer Philips digital sonics, recorded by Philips in the Concertgebouw, are slightly warmer in the lower midrange, slightly more forward in the upper midrange, and slightly more grainy overall than EMI's, although the recording is marginally wider in stage width, with a touch wider dynamics and more ambient bloom. Both recordings, along with Haitink on Decca and the older Mravinsky performance on BBC, are worthy tributes to Shostakovich's vision of the futility of war and dictatorship.