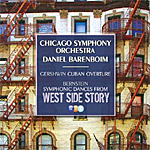 This 2010 release collects together four recordings Daniel Barenboim made with the Chicago Symphony during his tenure there as Music Director in the 1990's and early 2000's. Interestingly, they come originally from three different record labels--Erato, Teldec, and Warner Classics--so, if anything, the listener gets a chance to hear and compare the different sounds these companies and their audio engineers afforded the players.

The program begins with the Cuban Overture (1932) of American composer George Gershwin (1898-1937). This is a colorful piece of music, with plenty of vitality, so it's hard for anyone to go wrong with it. Barenboim brings out most of the work's forward drive and is never too hectic about doing it, providing the slow middle section a commendable serenity. It makes an enjoyable curtain-raiser.

Next is the centerpiece of the album, the Symphonic Dances from West Side Story by American conductor and composer Leonard Bernstein (1918-1980). Many of us tend to remember Bernstein mainly as a conductor of the New York and Vienna Philharmonic orchestras and maybe forget that he was also a prolific composer of works like Fancy Free, On the Town, Wonderful Town, Candide, On the Waterfront, several symphonies, numerous smaller pieces, and, of course, the monumental Broadway success, West Side Story (1957). Here, we get the ten-movement suite of orchestral music from the show, his Symphonic Dances (1961). Almost any listener will recognize the tunes, with Bernstein's familiar Latin rhythms and streetwise jazz style. Although Barenboim lingers a bit too long in the slower Adagio sections like "Somewhere," tending to over sentimentalize them, this is a musical of high emotions, after all, so we can probably excuse his few indulgences.

After all the energy of the jazz-inflected American selections, the concluding Ravel and Wagner tracks seem oddly out of place, even disconcerting. However, Barenboim is moderately effective in them, so all is not lost. He presents Maurice Ravel's little Suite No. 2 from Daphne et Chloe (1912) with subtle charm, building appropriately to an exuberant finale. Then we get Richard Wagner's Tristan und Isolde Prelude and Liebestod, the music about as far removed from Gershwin's Cuban Overture as you can get. Wagner's music is possibly the most-romantic material ever written, and while Barenboim's approach doesn't seem as totally impassioned as it might be, the Chicago Symphony Orchestra plays it exceptionally well, which goes a long way toward making it worth our attention.

Warner Classics recorded the Gershwin and Bernstein tracks in Medinah Temple, Chicago, in 1997. The sound exhibits a wonderful sense of hall space and orchestral depth but also a rather edgy high end and a somewhat thin bass. Erato recorded the Ravel piece in Orchestra Hall, Chicago, in 1991, and Teldec recorded the Wagner in Orchestra Hall in 1993. These latter works sound altogether warmer and smoother, even though they're not as dimensional. They make up for their comparative lack of sparkle by being more suave, more refined, the acoustic a touch softer and more resonant.

Email ThisBlogThis!Share to TwitterShare to FacebookShare to Pinterest
Labels: Bernstein