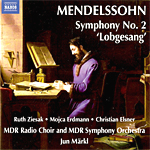 Felix Mendelssohn (1809-1847) wrote his Symphony No. 2 "Lobgesang" ("Song of Praise") to commemorate the 400th anniversary of the Gutenberg printing press, and it was apparently quite a success at its première in 1840. Today, Mendelssohn's Third and Fourth Symphonies, with their simpler structures and catchier tunes, tend to overshadow the Second by quite a ways, but there's no denying the Second is big. After all, there wasn't just the printing press to think about, there was that whole Gutenberg Bible thing to honor. So Mendelssohn wanted the music to be grand, nay, grandiose, and may have used no less than Beethoven's Ninth Symphony as his model. Certainly, the present disc from Jun Markl and company catches much of that momentous quality the composer was striving to realize.

Because this is Mendelssohn, after all, we still get an abundance of memorable melodies, beginning with the long opening Sinfonia, which Markl takes at a commendably jubilant clip. This music gets the piece off to an encouraging start in the manner of a full-blown, curtain-raising overture. Mendelssohn described his Second Symphony as a "symphony-cantata," that is, a choral oratorio with full orchestral accompaniment, so the opening movements are purely instrumental, followed by a series of sung texts based on the Luther Bible.

Throughout the work we get suggestions not only of Beethoven but of Bach. Nevertheless, we mostly hear pure Mendelssohn, who along with Schubert was one of the most tuneful composers who ever wrote. Markl seems to take a special delight in the perky second movement Allegretto, and then offers up a most serene and spiritual Adagio religioso. When the choir enters in the fourth segment, they sound glorious, and the soloists sing radiantly in subsequent passages.

Mendelssohn accomplishes his goal of praising Gutenberg and God, and Markl and his musicians accomplish their goal of making it all as thrilling, inspirational, and accessible as possible. The disc is an impressive achievement all the way around.

Releasing the disc in 2010, Naxos recorded the music in Leipzig, Germany, in 2008, producing a sound that is appropriately massive, the orchestra and chorus filling the room from end to end. More important, it's largely good, clean, clear sound, with just enough ambient bloom to provide a realistic concert-hall feeling. Stage depth is fine, dynamics acceptable, and voices, while a tad thick, fairly natural. On the whole, the CD makes an enjoyable listening experience.