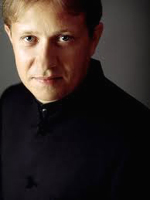 "I am inspired and thrilled to unveil the first season designed by our next Music Director, Ludovic Morlot," Chihuly stated. "It is a spectacular season full of exciting new repertoire along with treasured favorites. I know that everyone in our community will want to take part in what Seattle Symphony has to offer, from our free Day of Music community event this September, to any number of the magnificent concerts we will present."

"To use an Americanism, I'm champing at the bit," Morlot commented. "I can't wait to make music with my colleagues in this excellent orchestra, have these programs vividly come to life in Benaroya Hall and to share them with the city. My family and I couldn't be more excited about moving here and becoming Seattleites."

Simon Woods, who becomes Seattle Symphony Executive Director in May 2011, said, "Ludovic Morlot's eclectic embrace of an enormous range of musical styles is strongly in evidence in this wonderful season, and will bring something very special to the Seattle region and indeed to American musical life in general. This is a pivotal moment for this dynamic organization, and it is an enormous privilege to be able to work with Ludovic—and of course with Gerard Schwarz in his new role as Conductor Laureate—as  we march into an exciting future together!"

The Masterworks Season is the core of Seattle Symphony's repertoire, and next season nine of its 21 weeks will be conducted by Ludovic Morlot. The series opens with September performances of Frank Zappa's Dupree's Paradise from The Perfect Stranger, Henri Dutilleux's The Tree of Dreams with violinist Renaud Capuçon, and Beethoven's Symphony No. 3, "Eroica," conducted by Morlot. The series concludes in July when Morlot leads performances of The Planets – An HD Odyssey, featuring state-of-the-art, high-definition images from NASA's exploration of the solar system, originally created by the Houston Symphony. Additional Masterworks Season highlights include Stravinsky's The Rite of Spring; Berlioz's The Damnation of Faust, featuring Seattle Symphony Chorale, Northwest Boychoir and distinguished soloists; Rachmaninov's Piano Concerto No. 3 with soloist Stephen Hough; Ives' Symphony No. 2; Brahms' Violin Concerto with soloist Jennifer Koh; and Chopin's Piano Concerto No. 2 with Marc-André Hamelin.

Also featured next season are composers whose works are new to Seattle Symphony, including Henri Dutilleux, Oliver Knussen and Nico Muhly. Dutilleux's compositions, described by the Los Angeles Times as occupying "a sonic world of [their] own," feature prominently on the Masterworks Season with performances of: The Tree of Dreams with violinist Renaud Capuçon; Cello Concerto, A Whole Remote World, with cellist Xavier Phillips; and Symphony No. 1. His works for small ensemble will also be explored by a number of Seattle Symphony musicians performing on the Chamber Series next season. Oliver Knussen will conduct his own Violin Concerto on the Masterworks Season, with guest violinist Leila Josefowicz. Additionally, Knussen's works will be explored on the Chamber Series. A world premiere by 29-year-old Muhly will be performed during the Masterworks Season, conducted by Ludovic Morlot.

Following 26 years as Music Director, Gerard Schwarz will become Conductor Laureate in the 2011–2012 Season. Schwarz is widely known for leading Seattle Symphony to international prominence by raising the artistic quality of the Orchestra, advocating for the construction of the acoustically excellent Benaroya Hall, generating more than 140 recordings, and garnering 12 Grammy nominations.