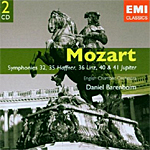 With so many competing sets of late Mozart symphonies to choose from, it's futile to recommend any single one as being best of all. But I will say that if I had to live with only one set, Barenboim's from the late Sixties, early Seventies would be high on my list of choices.

This is not to say I don't have individual favorite conductors and orchestras in each of the works; yet while I may enjoy Jochum in No. 41, Klemperer in No. 40, Davis in No. 39, Krivine in No. 29, Marriner or Bernstein or Mackerras in some others, and so on, I can't think of another conductor beyond Barenboim who brings so much joy to all of the works equally.

Yes, it may simply be nostalgia. After all, I've owned these Barenboim recordings on LP and CD for some forty years. But hearing them again in EMI's two low-priced 2-disc sets convinced me otherwise. They really are that good, both musically--interpretively--and sonically. And I continue to think that Barenboim's performances of Nos. 31, 35, 36, 39, 40, and 41 are among the best anyone has ever produced. They have vitality above all, the trim, athletic English Chamber Orchestra under Barenboim's conductorship producing remarkably fleet, lithe results. There is a grand scope to each piece that befits Mozart, a hushed tranquility in the slow movements, a proper proportioning of moods and contrasts, and a dynamic spark that sets them above the ordinary. Neither do the readings sound lackadaisical nor out of breath, but swift and youthful and occasionally playful, like Mozart himself when he wrote them.  They are all of them a genuine joy to hear.

On these mid-priced, reissued 2006 sets, the EMI engineers used the same 1991 transfers they had for the earlier full-priced CD set, and in comparison to the older discs they sound, as they should, alike. Fortunately, that is very good, indeed. These recordings may be four decades old, but they sound brand new. They possess a fullness, a richness, and a transparency that outshine most new recordings.