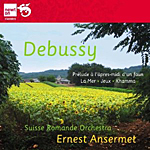 Following hard on the heels of EMI's recent two-disc collection by various artists of music by French composer Claude Debussy (1862-1918) comes this single-disc album of selections by Swiss conductor Ernest Ansermet (1883-1969) and the orchestra he founded in 1918, the Orchestre de la Suisse Romande. The disc comes to us from the relatively new company Newton Classics, who have been reissuing older classic material from major record companies like Philips, DG, and Decca. In this case, however, it's a bit unfortunate that they chose this particular recording of Ansermet's Debussy, since I have never thought of it as among the conductor's best work. I suppose the folks at Newton know the conductor still has a legion of admirers, and fans will welcome everything they can get, especially when it sounds as good as this.

Next comes the centerpiece of the album and probably Debussy's most-famous piece of music, La Mer (1905), his symbolic musical representation of the sea. Ansermet was old enough to have known and actually discussed things with the composer, but that doesn't mean that every one of his performances was, therefore, necessarily the best and most authoritative possible. I mean, even composers themselves have performed and recorded less-than-stellar interpretations of their own material.

In the case of La Mer, Ansermet was in his late seventies when he recorded this performance of it, and while there is certainly nothing wrong with it, his rendition sounds a little more earthbound than ethereal, more landlocked than indicative of the open sea. Maybe he was just getting older, but he seems better here at handling the gentler swirling of currents than the bigger, more-active howling of winds and crashing of waves. Then, the final movement is more foursquare than evocative, the emphasis apparently on clarity of texture rather than on atmosphere or emotion.

The selections end with two lesser-recorded Debussy ballets, the dance-poem Jeux (Games, 1913) and the "legend in dance" Khamma (1912). Jeux is Ansermet's most accomplished performance on the disc, and one can hardly complain about it. We hear Khamma in the exotic orchestration completed by Charles Koechlin, and here I found Ansermet's clear vision probably a tad overanalytical.

The first thing one notices about this 2011 Newton Classics reissue is that the noise reduction used to clean up some of the original tape hiss also leaves a kind of background swish. It's only noticeable during quieter passages, though, and it doesn't interfere with one's enjoyment of the music. Besides, it beats the alternative. Decca made the recordings between 1957 and 1964, after all.

There is a nice sense of orchestral depth and transparency to the sound, with a wide dynamic range and at least occasional strong impact. It reinforces my belief that the twenty-odd years covering about 1954 to 1978 produced some of the best recordings ever made; and when companies remaster them well, they can sound as good or better than anything recorded today.