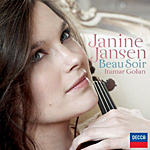 You'll forgive me, I hope, if I sometimes confuse violinist Janine Jansen with violinist Hilary Hahn. They are both about the same age, both burst upon the musical scene at about the same time, and both possess about the same prodigious talent. I mention this because I hope they never consider themselves rivals; there is always more than enough room for many more such superb musicians.

Anyway, on this recital album, Beau Soir ("Beautiful Evening"), Ms. Jansen takes us through a program of ten selections of French music, three of them world premieres, which the back cover describes as "leading us from dusk into evening and finally a moonlit night."

The recital begins with Claude Debussy's Violin Sonata in G minor (1917), a piece in three movements for violin and piano. It's an appropriate opening number because it sets the tone for the delicate colors and expressive harmonies to come. Ms. Jansen and pianist Itamar Golan present the work in both a dreamily exotic manner and a variably atmospheric one. With these performers the music sounds almost improvisational, the mood swings coming quickly, frequently, and seemingly instinctively.

Next, we have "Beau Soir" (c 1883), which gives the album its name. Debussy wrote it as an art song, and Jascha Heifetz subsequently arranged it for violin and piano. It's concise and poetic, with a beautifully fluid lyricism. Following this, we get a transcription of Debussy's popular Clair de lune (1905) from his Suite bergamasque for piano. Ms. Jansen maintains a gentle, graceful touch throughout, making the music more poignant than ever.

Moving along, we hear La Minute exquise, the first of three première pieces on the disc by French composer Richard Dubugnon (b. 1968). The other works by him are Hypnos and Retour a Montfort-l'Amaury, all three of them appearing to show the influence of Ravel and Debussy and reflecting brief, flowing, intertwining melodies of charming eloquence.

The other pieces by such familiar names as Gabriel Faure, Olivier Messiaen, Lili Boulanger, and Maurice Ravel (whose Violin Sonata in G major is the most unusual work on the program for its jazz impressions) exhibit a similar Gallic flavor, with representative themes clearly etched.  Most important, Jansen and Golan are always in complete sympathy with one another, the playing light and ethereal without ever being in any way flimsy or inconsequential.

Decca recorded the album at Teldex Studio, Berlin, in May of 2010. The sound they obtain is fairly close yet warm, slightly soft, and comfortable. Although I would have preferred a touch more air and definition, it certainly fits the music involved. The sound can also be quite dynamic at times and show off the rich, mellow quality of the "Barrere" Stradivari Ms. Jansen plays.