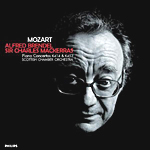 Some critics have complained over the years about Brendel sometimes being overly fussy, overly intellectual in his music making, but here he seems almost completely at home.  He remains a wondrous musician, yet he keeps surprising us with the delicacy of his touch and the seeming spontaneity of his gestures, pauses, and nuances.

I confess to a greater delight in Mozart's Concerto No. 17 than in No. 12, so let me just mention a few of its pleasures. The opening is almost magical, and Brendel makes the most of it, charming us with its lush yet spirited Romanticism. In the second, slow movement, Brendel does seem a tad self conscious, almost as though he's sometimes stopping to admire his own work; but it comes off dreamily enough. And the Finale points to Papageno's song in The Magic Flute of a few years later, so we know perhaps from where Mozart got his later inspiration. Like the rest of the work, the Finale is both attractive and winsome.

It's always nice to see Philips issuing discs, as they were still doing when they released this Mozart recording in 2006; they seem to do so little of it lately compared to the old days. They haven't changed their overall sound much, either, the 2004 recording being big and warm. It's not always a model of utmost transparency, however, so don't expect a lot of inner detailing. In fact, it's somewhat overblown in the orchestral department, the Scottish Chamber ensemble sounding bigger than it probably is, due to plentiful room resonances. Nevertheless, the piano sounds very lifelike, and it's here you'll want to spend most of your time.

Incidentally, it's also almost like old times seeing Brendel's face on the booklet cover, something of a tradition with Brendel and Philips for decades.