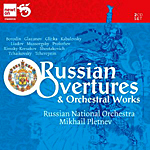 Russian pianist, conductor, and composer Mikhail Pletnev founded the Russian National Orchestra in 1990, the first orchestra since the Russian Revolution in 1917 not sponsored by the government. In over two decades since its formation, the orchestra under Pletnev has given us some of the most attractive and stimulating recorded music one could ever want, as this two-disc set attests. Originally recorded by Deutsche Grammophon, the Newton Classics label, who specialize in bringing back older, noteworthy recordings, have now reissued it at mid price.

Disc one contains nine short overtures and preludes, starting with Mikhail Glinka's Ruslan and Ludmila Overture. It makes for an extraordinarily exciting opening number, with Pletnev attempting to set a new land speed record. The virtuosity and precision of the Russian National Orchestra are remarkable, and this piece makes a fine introduction to their skills, as well as a fine curtain-raiser.

Then we get more of the same with Alexander Borodin's Prince Igor Overture, although at a marginally more-relaxed pace appropriate to the less-frenetic nature of the music. Next, we find Dmitri Shostakovich's Festive Overture, something of a rarity for the composer, very joyous and happy for him, perhaps in celebration of Stalin's death the year before he wrote it.

Disc two covers the works of only three composers. It begins with three selections by Anatoli Liadov:  Baba Yaga, The Enchanted Lake, and Kikimora, the music running the gamut from boisterous to beguiling to slightly morose. Following those, we get two pieces I'd never heard before: Nikolai Tcherepnin's La Princesse lointaine and The Enchanted Kingdom, music lush, striking, and romantic.  And the second disc ends with a suite from Rimsky-Korsakov's Golden Cockerel, close to half an hour's worth as arranged by Glazunov and Steinberg.

All of this music is quite colorful, and Pletnev never fails to exploit every melodramatic turn and every delicate nuance. He has clearly proven his worth over the years, and one hopes he has put any personal troubles behind him and continues offering up beautiful music for many years to come.

Recorded in 1993-94 at the Concert Hall of the Moscow Conservatory, the sound is clean, smooth, and highly dynamic. It can also be a tad soft and lacking in the frequency extremes, especially on the first disc, with little high-end sparkle and only occasional low-end punch. While the result is more cushy comfortable than analytical, it is easy to listen to. Compared to, say, Georg Solti's Romantic Russia album with the London Symphony (Decca or LIM), the sonics on the Pletnev discs seem rather balmy and lightweight, with only the occasional bass drum to liven things up. Still, as I say, the set makes for easy listening.