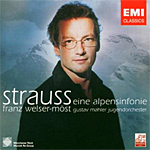 An Alpine Symphony, which Richard Strauss began in 1911 and completed several years later, would be the last of his big-scale, symphonic tone poems. He devoted his final thirty-plus years mainly to smaller works, songs, and, of course, opera. Supposedly, viewing the Bavarian mountains behind his home, the mountains he used to climb and enjoy in his youth, inspired the composer to write the symphony.

It's easy to view An Alpine Symphony as nothing more than a monumental picture postcard, causing many of its critics to frown upon it as lightweight fluff, hammy and melodramatic; yet I find it immensely entertaining. It describes in rather photographic detail the climb up and back down a majestic Alpine mountain, with the movement titles telling the tale, among them to give you the idea: "Night," "Sunrise," "The Ascent," "Entry into the Forest," "Wandering by the Brook," "By the Waterfall," "On Flowering Meadows," "An Alpine Pasture," "On the Glacier," "Dangerous Moments," "On the Summit," "Calm Before the Storm," "Thunderstorm," "Sunset," and a return to "Night." Strauss graphically represents all of the events, and while there may be one climax too many, it is all vivid enough to give one the sense of being on the mountain with the climbers and experiencing the grandeur and mysticism of the moment.

My only serious hesitation about this EMI disc going in was that maestro Franz Welser-Most was conducting a youth orchestra. Was a youth orchestra up to handling so extensive, so widescreen and Technicolor a production? The disadvantage I foresaw was that the young people lacked experience--experience playing this particular music, experience playing music of any kind, and experience playing together for very long. But after a few minutes of listening to the performance, all doubts vanished as I realized that the advantage of the youth orchestra is that it utilizes the talents of the best young players from all over Eastern and Western Europe. It's like a young all-star team, and they appear to work well with another.

The recording, however, is more problematical. EMI made it live in the Musikverein, Vienna, in March, 2005, with the various distractions attendant to live performances. There are the odd noises here and there, the rustling of pages and the shuffling of feet, in part no doubt from the audience and in part from the players themselves. And there is the odd recording acoustic, which puts the first-row violins in our lap, while distancing the third and forth rows in exaggerated fashion. The clarity is outstanding, though, the double basses growling affectionately, the organ producing some satisfyingly deep notes, and never a trace of over-brightness or edge.

The question is whether this would make a first-choice recommendation in the work, and the answer here has to be an obvious no. I'd go with Rudolf Kempe in his EMI or Brilliant Classics box sets or Haitink (Philips), Previn (Telarc), Blomstedt (Decca), Karajan (DG), or any of a number of noted conductors and world-class orchestras that exhibit a greater sonority and bite than Welser-Most's youth group. Nevertheless, as an adjunct to the top contenders, this recording is refreshing in its candor.