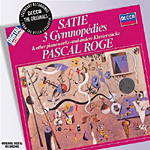 Erik Satie (1866-1925) wrote primarily solo piano music, and most of his best material can easily fit on a single disc. Of the single-disc collections currently available, this one with pianist Pascal Roge, reissued in Decca's "Originals" line several years ago, and one by Aldo Ciccolini in EMI's "Great Recordings of the Century" line, issued a few years earlier, are probably a person's best current bets for this music.

Both Roge and Ciccolini include the three Gymnopedies, those lovely kaleidoscopic views of impressionistic imagery, plus the six Gnossiennes and an assortment of other, differing pieces. The choice between the discs may come down to which sound you prefer and which accompanying material you like.

As for that sound, both recordings are digital and derive from the mid 1980s, but while the EMI disc is marginally clearer, better focused, it also has some odd swishing noises between notes, possibly caused by the pianist himself. The Decca disc, on the other hand, is slightly softer, warmer, and maybe a little more veiled, but it tends to complement Satie's lushly romantic world in the process. In addition, Roge includes a couple of Satie's delightful music-hall songs I like a lot and which the composer transcribed for piano: "Je te Veux" ("I Want You") and "Le Picadilly."

The playing time on both discs is generous, over an hour for the Decca and even longer for the EMI. They are both fine collections of some of Satie's best work, performed with authority by two fine Satie interpretors.

OK, since their respective companies offer the discs at mid price, maybe buying both of them is a person's best choice.

Email ThisBlogThis!Share to TwitterShare to FacebookShare to Pinterest
Labels: Satie