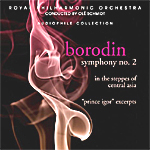 If you don't already own the basic Borodin works on this disc, and if you don't wish to invest in an older, classic recording from conductors like Beecham, Solti, Martinon, or Ashkenazy, this relatively new digital production from Ole Schmidt and the Royal Philharmonic Orchestra should fill the bill nicely. It includes three of the composer's most-popular works--excerpts from Prince Igor, In the Steppes of Central Asia, and the Symphony No. 2--in first-rate sound.

Aleksandr Borodin (1833-1887) never finished his opera Prince Igor, and his friends Nicolai Rimsky-Korsakov and Alexander Glazunov completed it for him after his death. Although opera companies don't perform the complete opera very much anymore, most orchestras do play certain excerpts from it often, like the three segments presented here. Maestro Schmidt offers up the Overture in a smooth and comfortable interpretation rather than a particularly passionate or stimulating one. Still, it makes a good curtain-raiser. Then come the Polovtsian Dances, here in a purely orchestral arrangement rather than with chorus. Oddly, Schmidt turns up the heat a notch more than he did in the Overture. Finally, we get the Polovtsian March, which Schmidt handles in an appropriately jubilant spirit, even if it's a little foursquare in its execution.

In the Steppes of Central Asia (1880) is a brief, atmospheric tone poem. The composer described it as depicting a caravan in the desert, escorted by Russian soldiers. It is Schmidt's most-successful realization in the program, delicately evocative yet grandly eloquent.

The album concludes with the Symphony No. 2 in B-minor (1877), which Borodin wrote while also working on Prince Igor, so you'll find reflections of both works in each other. It's not a long symphony, but it is exotic and colorful, starting with a large-scale Beethovian flourish and moving quickly into Rimsky-Korsakov territory with its main theme. After that, we get the second-movement Scherzo, which Schmidt plays a bit more slowly than, say, Martinon, and not drumming up as much excitement or lyricism as I have heard before in the music. The conductor is best in the Andante, which sounds quite lovely in its dark, almost forbidding way. Closing things out, there's the Finale-Allegro, which both Schmidt and the sound engineers handle with great joy and enthusiasm. Nevertheless, there seems to me a certain reticence on Schmidt's part to engage the music fully. Perhaps it was his age at the time he conducted it; perhaps not. In any case, his performance is well worth hearing.

The sound, copyrighted in 2007 by Royal Philharmonic Masterworks and Sheridan Square Entertainment and released in 2011 by Allegro Corporation, is big and warm, with a wide dynamic range and reasonably good impact. The back cover claims that RPM made it as a "20 bit digital recording, edited and mastered via 32 bit digital sound processing," rendering the results in high definition. Hype aside, the sonics do sound quite natural, if a tad short on ultimate transparency. However, there is a fine sense of left-to-right imaging, orchestral depth, and sparkle at the high end, making the music all the more fun to listen to.

Email ThisBlogThis!Share to TwitterShare to FacebookShare to Pinterest
Labels: Borodin