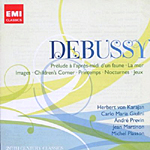 A short while ago I reviewed EMI's two-disc collections of Essential Ballet and Ballet Adagios, both sets drawn from the company's extensive back catalogue of recordings. Now, they have issued a two-disc set of works by French impressionist composer Claude Debussy (1862-1918). Again, we get some of the finest recordings of his music ever made, all of it in quite good sound. And unlike the ballet sets, which provided only bits and pieces of longer works, the selections on this Debussy set are more-or-less complete, mainly because the works are so brief to start with. In any case, with seventy-three minutes on the first disc and seventy-eight on the second, it's a bargain collection at mid price.

Next up is La Mer (1904), with Carlo Maria Giulini leading the Philharmonia Orchestra. The reading is very lush and highly evocative, the conductor providing a genuine feeling for the sea, with some serious salt spray practically splashing across our face. The music sounds beautifully realized in all three movements. It's unfortunate that there is occasionally a small degree of shrillness in the sound, which may deter one's ultimate appreciation for the piece. Still, it's only a minor distraction.

The first disc concludes with Debussy's Images for Orchestra (1908-1912), the pieces he wrote after composing two sets of Images for piano. Debussy finds Andre Previn and the London Symphony at the top of their game, and they benefit from some of the finest sound in the collection. Anyway, you'll find these brief Spanish pictures moving, exciting, and effectively done.

Disc two opens with Children's Corner (1908), piano pieces orchestrated by Andre Caplet, and performed by Jean Martinon and the Orchestre National de l'ORTF. Debussy meant the music to evoke reminiscences and pictures of childhood, with titles like "Jimbo's lullaby," "The Snow is Dancing," and Golliwogg's Cakewalk." As Martinon is my favorite conductor in French music, this series of selections can't miss.

Next is Printemps (1882), with Michel Plasson and the Orchestre National du Capitole de Toulouse.  It's an early work by Debussy, strongly resembling the Prelude, and it is quite lovely, with Plasson emphasizing its beauty and serenity. Trois Nocturnes (1900) come next, again with Carlo Maria Giulini and the Philharmonia. Here, we get three musical impressions of paintings by James McNeill Whistler, each with its own play of contrasting light and shadow. Giulini's interpretation is aptly translucent. Then, the album ends with Martinon and the Orchestre National de l'ORTF doing Jeux (1912), Debussy's final orchestral work, a short ballet commissioned by Sergei Diaghilev. Needless to say, Martinon handles it exquisitely.

Recorded by EMI between 1962 and 1988, the sound of the various items displays a remarkable uniformity. Most of it is smooth, dynamic, and reasonably transparent. There is a small degree of heaviness about the Karajan contribution and in a few of the other numbers a slight veiled or muted quality at the high end, plus a bit of harshness. I suspect this comes with age and with the audio engineers attempting to use just the right amount of filtering and noise reduction to make everything acceptable to modern ears. When the sound is good, it's excellent, admirably clear, with good bass response; when it's not, it's hardly an issue.