You might consider buying this two-disc set just for the sound. It's that good. 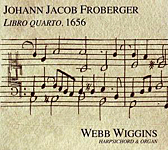 Froberger (1616-1667) was a German Baroque composer, organist, and keyboard specialist. He was quite popular in his day, and his work continued to influence musicians well into the eighteenth century. The Libro Quarto of 1656 that we have here is among the last collections of his music that scholars have found. Webb Wiggins, a member of the Smithsonian Chamber Players since 1985 and an associate professor of harpsichord at the Oberlin College Conservatory, presents some of the pieces on harpsichord (one modeled on an instrument produced in Paris, 1667) and some on organ (one constructed on organ-building principles of the early 17th century), depending on the specific need or Wiggins's inclination. In either case, he plays them with the utmost grace and style.

Disc one contains eighteen items. First up are six toccatas, the form being Italian in origin and more seemingly improvisational than the other pieces on the disc. Toccata IV in F Major is especially moving. Wiggins plays most of the pieces on harpsichord but No. V in E Minor on organ, giving it a more-elaborate, ecclesiastical stance.

Next are six ricercars. Wiggins explains that they are "forms which refer to an old style of composition imitative of sixteenth-century sacred polyphony and having long note values, solid rhythms, and solid meters." Thus, he decided to play them on organ.

Six capriccios conclude the first disc. The capriccios are a little more lively than the other works, and Wiggins says they sound good played on either organ or harpsichord. He chooses, however, to play most of them on the organ.

Disc two contains six Froberger suites. Unlike the Italianate music of disc one, the French-inspired suites are dance-based numbers. Therefore, Wiggins chooses to play them entirely on the harpsichord. These pieces are all in four movements, alternating slower with more active segments: Allemande, Gigue, Courante, and Sarabande. The exception is Suite VI in C Major, which begins with a Lamento, a lament for the Emperor's son and heir, who died the year of the composition. Otherwise, Wiggins plays the music in a stately, refined manner, appropriate to the times and eschewing any temptation to rush them along or impose on them any extraneous frills or false excitement.

I suggested earlier you might consider this set for its sound alone. It is indeed one of the best-sounding discs I've heard for a while, the harpsichord music in particular. Recorded in 2002 and released in 2009 on the Smithsonian's Friends of Music label, the engineers miked the harpsichord just far enough away to produce a rich, sweet, mellifluous sound, with a pleasant ambient glow, but not so far away as to obscure any inner detailing of the music. It is without doubt among the finest harpsichord recordings I've heard from any company ever.

Email ThisBlogThis!Share to TwitterShare to FacebookShare to Pinterest
Labels: Froberger