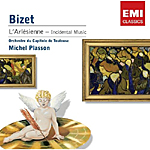 When French composer Georges Bizet (1838-1875) wrote his incidental music to Andre Daudet's play L'Arlesienne (The Girl from Arles) in 1872, the public and critics thought it distracted from the rest of the production. The fact is, it was probably better than the drama and simply upstaged it. Neither the play nor the complete incidental music have fared well ever since in their original form. But the sly Bizet recognized a good thing when he heard it and extracted two suites of music from his work, which have, of course, gone on to become classic warhorses that many of us prize in our collections.

Anyway, in 1982 Michel Plasson recorded the complete incidental music for EMI, pretty much as Bizet first intended it, and EMI reissued it at budget price a few years ago. It is a bargain for those looking for something different from the usual suites. Plasson's performance is delicate and nuanced, filled with sweetness and passion in equal amounts, but it's characterized mostly by the suaveness of Plasson's direction. Oh, you'll recognize all the familiar bits, to be sure, but it's the additional twenty minutes or so that are fascinating. It's also interesting, if not entirely better, to hear the music in its initial dramatic order rather than in the order of the suites.

EMI's sound is fine, too, smooth and spacious, with plenty of bloom and ambient air. However, and here's the rub, when you compare it as I did to Paul Paray's 1956 recording of the suites for Mercury, you find the old Mercury sounding much firmer, much more transparent, and much more authoritative all the way around. Think of that: A recording thirty years older sounding thirty years better than the newer one. Nevertheless, I wouldn't let that deter one from listening to the Passon disc, especially at its super-cheap cost.

Email ThisBlogThis!Share to TwitterShare to FacebookShare to Pinterest
Labels: Bizet