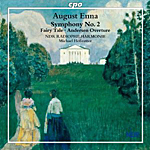 At one time Danish violinist, conductor, and composer August Enna ((1859-1939) was among the most-popular Nordic musicians in the world, but we don't hear much about him anymore. He came to prominence with his Wagnerian-inspired, fairy-tale operas, operettas, choral works, ballets, symphonies, concertos, songs, and orchestral music. Still, time and styles change, and today the world has largely forgotten the man. Fortunately, we get the occasional album such as this one devoted to some of his more-accessible creations.

The disc starts with Fairy Tales: Symphonic Pictures (1905), a four-movement suite of tone poems apparently inspired by the writings of fellow countryman Hans Christian Andersen. However, without much to suggest what stories go with what tunes, it's hard to tell exactly what the music represents. Because Enna divided the Fairy Tales into four sections, it makes the whole work seem something like a traditional symphony, starting with a slowly building Allegro, then a slightly foreboding Andante, followed by what is essentially a third-movement scherzo (Allegro vivace), and concluding with another highly dramatic Allegro. Maestro Michael Hofstetter and the NDR Radio Philharmonic perform it with a restrained gusto that seems appropriate to the mood.

Next in the program we find the Hans Christian Andersen Festival Overture (1905). Like the Fairy Tales, the Overture is mainly atmospheric, a tone piece meant to remind the listener of fairy tales in general rather than any particular ones.

The album ends with Enna's Symphony No. 2 in E major (1908). Truth be told, this doesn't sound a whole lot different to me than the Fairy Tales. It's colorful and brawny, to be sure, but it doesn't exhibit the wealth of melodies or the musical innovation that would have made it popular to our own day. Still, Hofstetter does what he can with it, and there are several delightful moments along the way reminding one at least in part of Humperdinck's Hansel and Gretel (written a decade earlier).

Although CPO released this disc in 2011, they recorded it in 2004-05. While the sound they obtained is a tad thin and sharp edged, it's fairly clean, clear, and dynamic, too, making it easy to distinguish much inner detailing. There's a pleasant depth to the orchestral stage and acceptable width, with a prominent but not-at-all forwardness to the upper bass/lower midrange. In short, the sonics are more transparent than those in most modern recordings, even though they are not really in the ultimate demonstration class.

Email ThisBlogThis!Share to TwitterShare to FacebookShare to Pinterest
Labels: Enna