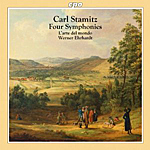 You probably recognize the name of German composer Carl Stamitz (1745-1801). He was the son of another musician famous in his time, the Czech composer Johann Stamitz (1717-1757). Both men were virtuoso violinists, and together they wrote about 800 symphonies, concertos, and chamber works in the popular Mannheim style the father founded. But can you actually name anything the young Stamitz wrote? Can you hum a piece of his music? I thought not. Carl Stamitz died in relative obscurity, and currently one can find only a handful of albums dedicated to his works alone. Such is the fleeting nature of fame.

This 2010 CPO release presents four of Carl Stamitz's symphonies, with Werner Ehrhardt leading the chamber orchestra L'arte del mondo, an ensemble Ehrhardt formed in 2004 to pursue early music on modern instruments. Stamitiz's symphonies, representative of the early classical period, feature mostly three-movement structures, usually omitting the minuets common to earlier arrangements. Because the symphonies are quite melodious, refined, and easy on the ear, one can understand why they became so popular, yet after listening to them, one can also understand why people so quickly forgot them.

The album starts off with the Symphony in D minor, Op. 15,3 (Kai 24). The salient point here is in the lively contrasts between each successive movement, from barely audible sections to momentous crescendoes. The piece is also quite concise, a little more than eleven minutes in length. Then we get the Symphony in E flat major (Kai 38), marked by a robust and invigorating opening Allegro con spirito, a sweetly flowing Andante, and an energetic conclusion.

Next is the Symphony in E minor, Op. 15,2 (Kai 23), the only symphony on the disc in four movements. It begins with a gentle, lyrical introduction that gradually moves into a more-animated passage. The succeeding Andante is far from slow but it is warm and friendly, suggesting a manner reminiscent of Haydn. After that, we get a Minuetto that is for all practical purposes a scherzo, changing the pace considerably. The work ends with a brisk Allegro assai that wraps up the symphony in a highly dramatic manner.

The album finishes with the Symphony in F major (Kai 34), subtitled "La Chasse" because of its hunting motif. We even hear hunting horns in the opening and closing movements. In between, there is much activity, motion, and invention, ending the program in a most imaginative way. Still, while Stamitz's music is pleasurable in the moment, it is largely unremarkable and hardly memorable.

Ehrhardt and his players obviously relish the variety in this music and perform it with precision, polish, and class. However, they are not without a sense of fun and joy in their performances, too, particularly evident in "The Chase."

The miking is fairly close and probably captures an accurate representation of the orchestra's sound.  Although the recording seems a tad forward, it projects a clear, clean sonic picture, with plenty of detail on almost every front. It also displays a wide dynamic range that may have the listener reaching for the volume control on more than a few occasions. Perhaps the audio engineers could have found a bit more weight at the lower and mid bass end; otherwise, things sound splendid, with a nice sense of air and ambience around the instruments.

Email ThisBlogThis!Share to TwitterShare to FacebookShare to Pinterest
Labels: Stamitz