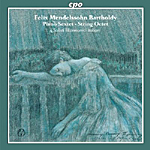 Felix Mendelssohn (1809-1847) wrote his Octet and Sextet while still in his mid teens, a remarkable feat for any composer at any age. But Mendelssohn was no ordinary composer, being a pianist, organist, conductor, and child prodigy besides a writer of music well loved to this day. To do justice to the composer's two early works on this disc, I Solisti Filarmonici Italiani play Mendelssohn's Octet and Sextet in what they describe as a composite of modern and period styles, using gut strings, mid-nineteenth century bows, and a 1928 Steinway grand piano. Whatever, the results are delightful.

Mendelssohn wrote the Octet for Strings in E flat major, Op. 20 in 1825, and critics generally consider it the man's first genuine masterpiece. The surprising thing to me a few minutes into the piece was not the period instruments or the hybrid style but how closely the first movement resembles the performance by members of the Academy of St. Martin-in-the-Fields in their celebrated 1968 Decca-Argo recording. Solisti Filarmonici Italiani match the older group almost note for note, with close to the same infectious charm. This means they take the opening Allegro at a fleet yet graceful pace, building a pleasant, festive foundation for the rest of the work.

It is in the slow Andante that Mendelssohn's idea of the piece being played like an orchestral symphony comes to the fore. Solisti Filarmonici Italiani play the softest and loudest passages with greater contrast than one would normally find from a chamber group, making the music more dramatic than usual. Then the third-movement Allegro leggierissimo fairly zips along, leading to the concluding Presto, which follows suit at almost the same tempo. While there is no doubt the music is among Mendelssohn's greatest, it still shows a youthful exuberance that I Solisti Filarmonici Italiani seem eager to exploit.

The Sextet for Piano and Strings in D major, Op. 110 (1824) preceded the Octet by a year but didn't see publication until after the composer's death. It is slightly darker and more sedate than the Octet, and as the name suggests, it puts the piano front and center, the instrument dominating the others at all points.  Solisti Filarmonici Italiani play it with the same vivacity with which they approach the Octet, the Adagio flowing along lovingly, the Minuetto exuding a Schubertian flair, and the final Allegro vivace full of spunk and high good cheer.

The recording, made in May, 2009, may be close up, but it's also reasonably warm and comfortable, at the same time admitting a good deal of detail and air. The sound is quite realistic, if a tad rough from the proximity of the period instruments. The enthusiasm one hears in the audio scheme benefits the joy of the music enormously.