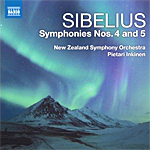 The Fourth Symphony (1911) of Finnish composer Jean Sibelius (1865-1957) is one of the man's bleaker but more-characterful works. The music always reminds me of a vast, flat, icy plain, maybe in Lapland, brooding in silence. That's the way young Finnish conductor Pietari Inkinen appears to see it, too, carving huge chunks of desolation from the music. It opens with a theme "as harsh as Fate," as the composer described it, and Inkinen follows through.

The succeeding Allegro molto vivace, which Inkinen takes rather leisurely, brings a note of great serenity to the otherwise dark proceedings, but then it also turns slightly sinister (although never threatening).

The slow Largo section Sibelius originally labeled "The Thoughts of a Wayfarer." It maintains the dour climate of the piece, with Inkinen emphasizing its mysterious nature at the expensive of capitalizing too much on its atmospheric mood shifts, instead interpreting it in a fairly static manner. In its favor, this establishes a good continuity in the music, even if it tends toward sameness.

While the final Allegro opens brightly, even cheerfully, promising a sudden change of temperament, it soon reverts to the desolation of the opening movement. Again, Inkinen is skillful at delineating these large, bleak landscapes.

Symphony No. 5, which Sibelius premiered in 1915 and revised in 1916 and again in 1919, is shorter than No. 4, here comprising only three movements. The feeling of No. 5 is far less heavy than No. 4, even if Inkinen seems to take delight in making connections to it, as though it were a continuation of the previous symphony, moving from darkness into light. The Andante is particularly delicate, and the finale, with its "swan" music, is quite sunny and attractive.

Would I give up Maazel (Decca), Davis (Philips or RCA), or Barbirolli (EMI) for this new issue by Inkinen? No, but I wouldn't turn it down, either.

Recorded in 2008 (No. 5) and 2009 (No. 4) at the Michael Fowler Centre, Wellington, New Zealand, the sound is big, warm, and resonant. There isn't much depth to the orchestral stage or much punch or snap to the dynamics, yet in No. 4, especially, the sonics seem perfectly appropriate to the music. Besides, when the high percussive notes come in, they ring out all the more sweetly and persuasively through the softer sound field.