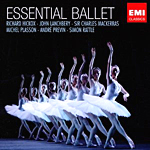 What do you get when you gather together some of the best selections from some of the best ballets performed by some of the best orchestras and conductors in the world and recorded in some of the best possible sound? Well, it's not hard to figure out. Now, while I wouldn't usually endorse such assemblages of bits and pieces, I'd say if you really had to have a collection of ballet highlights, there's none better than this 2010, two-disc release of reissues from EMI, drawn from their stereo catalogue of the past fifty or more years.

The set begins with John Lanchbery conducting the Philharmonia Orchestra in nine selections from Peter Tchaikovsky's big-three ballets: Swan Lake, Sleeping Beauty, and The Nutcracker. Although Lanchbery tends to be a little more gung-ho in these pieces than I like, he certainly brings out the color and drama--especially the drama--in the music.

Of the remaining tracks on disc one, I enjoyed Andre Previn and the London Symphony Orchestra doing two segments from Sergei Prokofiev's Romeo and Juliet. He brings power and grace to the work. We also get Previn and the LSO performing five selections from Prokofiev's Cinderella that are almost equally good; and Yuri Temirkanov and the Royal Philharmonic doing the lovely Adagio from Aram Khachaturian's Spartacus.

Disc two starts with two selections from Adolphe Adam's Giselle, again in excellent sound from conductor Robert Irving, this time with the Philharmonia (and from 1962, it's among the oldest yet most vivid and dynamic of the recordings here). Then, there are four selections from Riccardo Drigo's La Corsaire, arranged by John Lanchbery and played by Terence Kern and the London Festival Ballet Orchestra. Kern and company play them nicely, but they don't sound quite as stunningly recorded or performed as some of the other pieces in the set. Following these tracks are several selections from Leo Delibes's Coppelia and Syliva ballets, with Sir Charles Mackerras and the New Philharmonia; they are charming, if taken a bit too briskly for my personal taste.

The remaining tracks are exclusively one-off selections from a number of additional ballets. There are too many to mention them all, but among those I enjoyed the most were Manuel Rosenthal and the Orchestre Philharmonique de Monte-Carlo doing the Overture from Rosenthal's own arrangement of Jacques Offenbach's music in Gaite Parisienne; Georges Pretre conducting the Philharmonia in the Rondeau from Francis Poulenc's Les Biches; John Lanchbery and the Orchestra of the Royal Opera House doing the "Mrs. Tiggy-Winkle's Laundry" segment from Lanchbery's own Tales of Beatrix Potter; and Sir Charles Mackerras and the London Philharmonic in the Opening Dance from Mackerras's arrangement of Sir Arthur Sullivan's music in Pineapple Poll.

So, if I were selecting items from EMI's back catalogue, would I have chosen the same things the company include here? Probably not. I would have gone with more of Previn's LSO recordings, particularly in the Tchaikovsky; I would have taken Jean-Baptiste Mari over Mackerras in the two Delibes ballets; I would selected Aram Khachaturian's own performance of his Spartacus music; and so forth. But I quibble.

There is much more, of course, that I haven't mentioned, but none of it is anything short of very good, and you'll find none of it recorded in anything less than very good sonics. If you're a fan of EMI's sound, especially their studio productions, you'll enjoy what you hear on these discs, with much of the music recorded in the Sixties and Seventies sounding as good as or better than the later material. It's a worthwhile set all the way around.

Then, as a companion to Essential Ballet, EMI simultaneously issued a two-disc set of Ballet Adagios (EMI 50999 6 48630 2 3), in this case about twenty Adagios from the world's most-beloved ballets, performed by some of the world's great orchestras and conductors. Among the selections you'll find here are items from Tchaikovsky's Sleeping Beauty and Swan Lake, with John Lanchbery and the Philharmonia Orchestra; the Adagio from Khachaturian's Spartacus, with the composer leading the London Symphony; several selections from Adam's Giselle, with Terence Kern and the London Festival Ballet Orchestra; the ballet music from Gounod's Faust, with Herbert von Karajan and the Philharmonia; "The Dream" from Mendelssohn's Midsummer Night's Dream, with Andre Previn and the LSO; the Finale: Adagio from Bernstein's West Side Story, with Edo de Waart and the Minnesota Orchestra; etc. It's all very fine and captivating music.