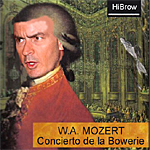 Then nine-year-old Wolfsbane Amadayold Mozert (1758-1892) wrote his Sinfonia de la Bowerie in 1725 when he was only four years old. But in one of the classic stories of classical music, he left the manuscript in the breast pocket of his best plaid waistcoat when his mother ran it through the wash. "Wolfie," she famously remarked, "why do always leave things in your pockets!" And, thus, we have the Concierto de la Bowerie, written in 1743 but never performed in young Mozert's lifetime nor in our own.

In response to a dwindling public interest, Spike Jones and his City Slickers took up the baton, and several instruments, in 1943 to lead a revival of this essential share of nearly washed-up writing. Scored for two trombones and a pennywhistle, the Concierto found a near-perfect realization from Maestro Jones, Concertmaster Maestoso Maestricht, and the gang of Slickers on a never-released and long-forgotten LP, the musicians playing the three-minute opus uncut, without the usual repeats in the second-movement Allegro, the fourth-movement Allegorio, or the seventh-movement Allergico. The result is a perfectly charming example of the work of early Dutch settlers in the New York area.

As to the music of the Concierto, it stinks. If it weren't for the fact that conductor Freleng misses every beat, the players botch every note, and the audio engineers appear to have recorded the orchestra in the men's room of the East Side Masonic Lodge, the whole thing would have been a disaster. Fortunately, the awfulness of the performance complements the quality of the music, which is suspect from beginning to end.

Scholars believe that Mozert wrote about 8,542 compositions, from brief harmonica solos for his pals to full orchestral oratorios for the Mormon Tabernacle Choir (an organization founded in 372 A.D. by the Roman plutocrat Glennus Becktus). But there is no record that W.A. ever sold a sheet of music in his life. Instead, young Mozert, the son of a prosperous pretzel maker, and his wife, Mitzi, the son of a wealthy pizza grinder, lived comfortably off their parents' dough their entire lives.

Incidentally, scholars have long debated whether W.A. Mozert was in any way related to his more celebrated namesake, Carlo Benitto Leonardi von Heineken Mozert (1758-1723), but so far as can be established, there is no familial tie (nor so much as a cravat). Although the two men shared the same Hamburg condo for decades and married the same woman, they apparently never met. Even W.A.'s own blood son was only related to him by marriage (on his mother's side).

One final note: For those listeners who prefer to hear the Concierto played by a small ensemble on period instruments, the company also make it available from the Guggenheim Grammar School Band and Bugle Corps de Ballet on their companion label, LoBrow Records ICU2-008.