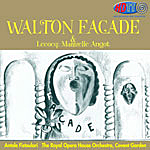 Facade was one of the early works of composer William Walton (1902-1983) and one that helped establish his career. Written in 1922 and first performed in 1923, Facade is Walton's musical adaptation of a series of humorous poems by Edith Sitwell, which he first composed for instrumental accompaniment to the poems, then arranged for orchestra alone (in two suites, 1926), and still later used in a pair of short ballets (1929 and 1931). On the present disc, we get the orchestral suites combined. It seems a little ironic that a composer best known today for the old-fashioned romanticism of his marches, symphonies, and choral works should have begun with the reputation of a jokester.

Conductor Anatole Fistoulari presents these eleven musical numbers with wit and sparkle. The items are quite a lot of fun and range from subtle satire to outright burlesque, with plenty of zip and pizzazz to the performances. A set of these items from Louis Fremaux and the City of Birmingham Symphony Orchestra appeared in the late 1970's and might be Fistoulari's closest competition, yet even those recordings can't match Fistoulari in terms of enthusiasm, verve, exuberance, or audio refinement.

Coupled with Facade is Mam'zelle Angot, another ballet, this one produced in 1943 and based on an 1872 operetta by Alexandre Charles Lecocq (1832-1918). Here, Fistoulari offers a seven-movement suite from the ballet, which, while it doesn't have the bounce or invention of the Walton pieces, is still charming in its own way, with some of the style of Adophe Adam and even Jacques Offenbach. And with Fistoulari's uncommon zest, the music makes for delightful lightweight entertainment.

Recorded by Decca in September of 1957 at Watford Town Hall, London, the sound is crisp and clean and remarkably quiet (thanks to a bit of noise reduction) in this HDTT transfer. You'll recall that the folks at HDTT (High Definition Tape Transfers) do some remarkable work transferring the sound from older, commercially available tapes to compact disc or download. In this instance, they surpass themselves with a transfer burnt to an HQCD in reference-quality audio. The disc displays an excellent high-end range and extension; strong, deep bass; and exemplary midrange transparency. Additionally, one notices a modest degree of orchestra depth and superb transient response, very quick, with sometimes extraordinary impact. Despite the age of the recording, the sonics are extremely good and easily surpass probably ninety percent of what most record companies make today.

About the only quibble one could make about the HDTT disc is the short playing time, about forty-five minutes total. However, this is not the fault of HDTT, who simply transferred the original album to disc. It was a short program to being with, and HDTT try to keep things as close to the original source as possible. Besides, this should not be a concern to the music lover since the performances are so good, nor to the audiophile since the sound is so good. It's a win-win argument all the way around.

Email ThisBlogThis!Share to TwitterShare to FacebookShare to Pinterest
Labels: Walton