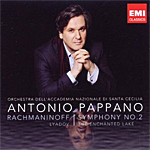 The disc begins with The Enchanted Lake by Russian composer Anatoly Lyadov (1855-1914), a friend of Rimsky-Korsakov. The Enchanted Lake is a magical work, quite brief but, as the title suggests, quietly enchanting, like a sort of shimmering mist. It provides an appropriately Debussy-like prelude to the big symphony by Rachmaninov (here spelled as the Americanized "Rachmaninoff").

Sergei Rachmaninov (1873-1943) premiered his Symphony No. 2 in E minor, Op. 27, in 1908. For many years thereafter conductors would play edited versions of the score, with cuts that Rachmaninov believed marred the music. Andre Previn and the LSO championed the complete account in their 1973 EMI recording, and it is still his performance one must look to for comparison. In the present recording, Maestro Antonio Pappano follows the longer edition as well, and he infuses it with a felicitous romanticism.

The Symphony begins with a long, slow introduction that, taking its own good time, eventually leads to the release of some pent-up tensions. At this point the main themes kick in, and Pappano makes the most of them, yet without too much sound and fury. He seems to restrain the music's passion throughout most of the work in favor of more subtle nuances.

Rachmaninov fills the Scherzo with contrasts, and he provides it with one of the piece's most-familiar themes. Pappano handles it relatively gently, never overemphasizing the obvious jumps in mood that occur throughout the movement. As a result, I didn't feel the warmth or abandon with this conductor as I have with conductors like Previn, Pletnev, or Ormandy.

Pappano's style seems best suited to the Adagio, the symphony's second-longest section and the one often trimmed, which comes off quite sympathetically. Although this is the most lushly sentimental of the work's music, the conductor never makes it appear too mushy. It's quite lovely and should delight anyone who hears it.

Whatever reservations Pappano may have had earlier, he loosens up in the Finale. Nevertheless, I still found a small degree of electricity missing that might have otherwise made my hair stand on end. In its place is a heightened sense of melody and tunefulness that goes a long way toward making one forget the movement's more-boisterous nature. This is, in short, a fluid, refined, cultured interpretation, somewhat genteel and over polished, perhaps, but always charming.

EMI recorded the performances live in Rome in 2009. You can tell the sound is in concert from the opening moments of The Enchanted Lake, with an airier acoustic than usual and faint audience noises audible. This is despite the fairly close miking. Once we get used to the "live" feeling, the sound is fine. It's rather short on depth, though, and even though it is mainly a bit soft, the strings can occasionally be a tad aggressive. Mostly, the sound just seems too polite; there is not enough dynamic thrust, not enough impact to make it come completely to life (except for a few bass whacks) and not enough transparency to impress the ear. It is, however, smooth and comfortable, so no listener is likely to go away entirely disappointed, and, indeed, some parts sound most realistic. Be that as it may, an eruption of applause at the end ensures that our enjoyment is short-lived.