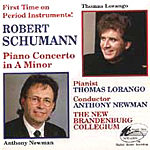 There is certainly no wont of good Schumann Piano Concerto discs on the market from artists like Stephen Kovacevich (Philips or Newton Classics), Van Cliburn (RCA), Radu Lupu (Decca or LIM), Vladimir Ashkenazy (Decca), Martha Argerich (EMI), Murray Perahia (Sony), Leiv Ove Andsnes (EMI), and more. Yet there is always room for one more, and this 1991 recording from pianist Thomas Lorango, conductor Anthony Newman, and the New Brandenburg Collegium, a recording I had never heard before, is certainly another one to consider, especially when it's as well played as here and has the unique advantage of using period instruments in its presentation.

Robert Schumann (1810-1856) wrote his Concerto for Piano and Orchestra in A minor, Op. 54, over a period of about five years before premiering it in 1845. He called it something of a concerto, a symphony, and sonata as he was writing it. Whatever, it works, and audiences have loved it for over 160 years.

Pianist Thomas Lorango tells us in a booklet note that the piano used in the recording is an original instrument built by the Viennese Johann Baptiste Streicher, its origins going back to c. 1792 (the piano on loan for the recording from the E. Michael Frederick Collection). Lorango further states that "rather than the bright, percussive sound of a modern instrument, the Streicher has a more singing, sustained sound, deep with resonance." It is, indeed, a gorgeous sounding instrument, no doubt helped along by Mr. Lorango's lyrical, "singing" style.

The opening Allegro is as liltingly beautiful as I've heard it, eschewing much of the brawny, bombastic tone one sometimes finds in performances of the work. Instead, the first movement flows gently and naturally, as Schumann intended, into the second-movement Intermezzo: Andante grazioso, which, like the preceding section, displays the beauty of the music rather than the showmanship of the performer. In the final movement, an Allegro vivace, Lorango does exhibit his virtuosity, yet he never does so in any frenetic or exhausting way. This is one of the loveliest Schumann Concerto performances I've heard, with or without period instruments.

The rest of the disc contains a number of solo Schumann selections from Lorango, starting with five items from the Kinderszenen (Scenes from Childhood), Op. 15, an adult's recollection of youth. The numbers are sweet and direct, with Lorango supplying loving care. Almost every listener will recognize the opening "Of Foreign Lands and People" and, of course, the famous "Traumerei" segments, whether the listener is a Schumann fan or not. Lorango plays these pieces, including the Romance in F-sharp Major No. 2, the Fantasiestucke No. 3, and the Gesange der Fruhe (Song of the Morning) No. 1, in a straightforward manner, with no attempt at overt sentimentality, making them all the more affecting by allowing the music to speak for itself.

Recorded digitally and released in 1993, the sound is top drawer in every respect, if not quite in the audiophile or demonstration category. The audio engineers capture the sound of the period instruments nicely at a moderate distance, providing a clear and lifelike presence without any disfiguring harshness or brightness. Like the rest of the orchestra, the piano sounds rich, mellow, and smooth. This is subtle, nuanced sound, perfectly balanced, with a touch of warm acoustic ambience to give it a truthful impression. It is not the kind of sonic spectacular that will knock your house down; it will just knock you out. Very pleasant stuff.