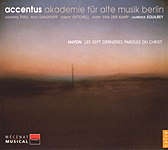 Many classical-music fans know that Haydn composed The Seven Last Words of Christ on the Cross first for orchestra, then for quartet, and later authorized a keyboard transcription. What people may not know is that he also arranged the piece as a cantata for voices and orchestra.

But it came about almost by accident. The idea never occurred to him to add voices until he was returning home from his second trip to England in 1795 and stopped off at the Bavarian town of Passau, where he coincidently heard a vocal-orchestral version of his work arranged by the local Kapellmeister, Joseph Friebert. There were no copyright laws back then, so I guess Friebert could do whatever he wanted with Haydn's music. The new arrangement impressed Haydn, although he thought he could do even better himself. And he did, in the version we hear on this disc, a version premiered in 1796.

According to the booklet note, Haydn rearranged several of the orchestral parts, added several more introductions, including a fairly lengthy one between the Fourth and Fifth Words, and then used mostly the Kapellmeister's sung text for the vocals.

The result is different, to say the least, and if anything sounds more spiritual than ever, especially in this recording with the Accentus Choir and the Akademie fur Alte Musik Berlin. It can also be a little easier to sit through, the vocal parts adding a bit more variety to the movements. Haydn had written about his original composition that "The task of writing seven successive adagios, each of them to last around ten minutes, without wearying the listener, was by no means an easy one." For this vocal-orchestral arrangement, the composer has less chance of "wearying" anybody.

Naive's recording of the soloists, the choir Accentus, and the Akademie under the direction of Laurence Equilbey is quite good. Never too forward, never too dull or reserved, the sound is quite natural and transparent, the singers well integrated into the aural setting. It's all rather beautiful, actually, and the disc makes a perfect addition to one's Haydn music library, complementing renditions for orchestra and quartet alone.