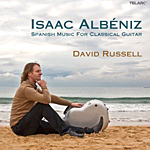 I've listened to several albums of music by Scottish guitarist David Russell, and he has always impressed me. He won a Grammy Award in 2005 for the CD "Aire Latino," and has deservedly become a world-renowned player. It's good to hear him here, playing a selection of fifteen short tunes by Spanish pianist and composer Isaac Albeniz (1860-1909).

These works are often hauntingly beautiful, and while Albeniz may have written them mainly for piano, they work wonderfully well on guitar. Indeed, they sound as though the composer should have written them for guitar. Russell plays them delicately, unhurriedly, caressing each note with loving care. There is a degree of melancholy in the tunes and in the playing that is hard to resist, yet it never crosses the line into mere sentimentality. Russell's playing displays a fine combination of virtuosity and sensitivity.

The highlights of the disc for me were the lovely, graceful "Granada"; the rhythmic "Cadiz"; the ultrasmooth and sophisticated dance number "Cataluna"; the slow Habanera titled "Cuba"; and the stately "Minueto." However, my absolute favorite of the bunch is Albeniz's "Tango." I could put the track in repeat mode and listen to the piece over and over again for hours. Russell's gentle handling of it is enough to bring tears to one's eyes.

Recorded at the Peggy and Yale Center for the Performing Arts, Owings Mills, Maryland, in April of 2009, the acoustic is rich and lightly resonant, giving the single instrument a pleasantly spacious sound. It is one of those recordings that makes you suspend your disbelief and imagine, if you shut your eyes, that the performer is there, on stage, a few feet away.

Email ThisBlogThis!Share to TwitterShare to FacebookShare to Pinterest
Labels: Albeniz