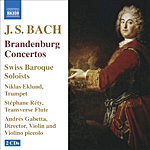 The booklet note says that the Swiss Baroque Soloists aim to "rediscover a new angle on baroque and classical repertoire, mingling energy and boldness in the exploration of rare repertoire and performing on original instruments." Well, "energy and boldness" don't always have to mean fast, and I wouldn't say that Bach's six Brandenburg Concertos exactly qualify as "rare," unless the word is being used in the sense of "great" or "unusually excellent." In any case, the Swiss Baroque Soloists do play with enthusiasm, and the two-disc set does come at a bargain Naxos price. Nothing wrong with that.

I just wish there was as much subtlety as there is vivaciousness in the playing. The opening to Concerto No. 3, for example, is so speedy one could call it breakneck, and for me, at least, it rather takes the joy out of the music when it moves by so rapidly. Besides, no matter how much the performers insist that their interpretations are authentic, I can't believe that bands in Bach's own day would have played with such haste. In any case, the group does slow down a bit by the time they get to the final pieces, so all is not entirely lost. And there is some fine, relaxed playing along the way in the slow movements, too, coming as blessed relief from their surroundings. Maybe that was the intent.

Accompanying the six concertos are the Trio Sonata from Bach's Musical Offering, also somewhat lacking in refinement, and a transcription of the Concerto in G minor, this one for flute and strings.

One might accuse the Naxos sound of being more than a tad forward, but it nicely complements the animation of the readings. My primary concern is that it doesn't display much depth or air, concentrating on a bright clarity and a wide dynamic range. The whole makes for an interesting but not an overwhelmingly satisfying listening experience.